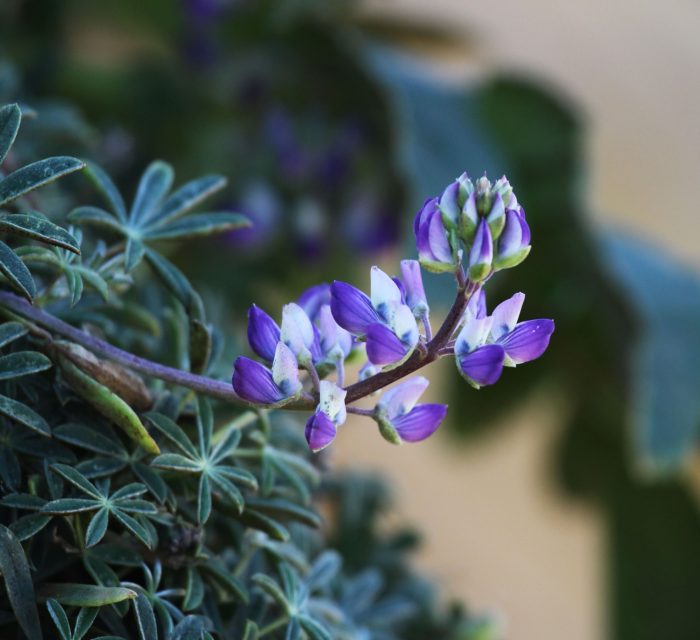 Climate change is altering the world we share with all living things. But it’s surprisingly difficult to single out climate change as an extinction threat for any one particular species protected under the Endangered Species Act.

To date, the U.S. Fish and Wildlife Service has only formally considered impacts from climate change in listing actions for four animal species and one alpine tree. But the effects of climate change extend to temperate climates as well. A new analysis of population data published in the journal Ecosphere shows that climate change represents a specific extinction threat for an endangered coastal lupine plant.

Biologists including Eleanor Pardini at Washington University in St. Louis have tracked all of the known stands of Tidestrom’s lupine at Point Reyes National Seashore north of San Francisco for more than 14 years. The plant is endemic to a small stretch of coastline in California and a very limited amount of its habitat is remaining. It is also threatened by native deer mice that can consume up to three-quarters of its unripe fruits under the cover of an invasive species of beachgrass.

If average temperatures increase by one degree Celsius (1° C, or about 1.8 degrees Fahrenheit) – a conservative assumption – the scientists project that 90% of individual lupine plants could be lost in the next 30 years.

Pardini, assistant director of environmental studies at Washington University and senior lecturer in Arts & Sciences, said: “In general, it is fairly difficult to conclusively say that climate change is a species threat.”

Modeling the threat of climate change requires long-term population data, which is difficult to collect and thus not available for most species. “We were able to perform this analysis and show climate change is an important additional threat factor for this species because we have spent considerable effort collecting a long-term dataset,” Pardini added.

To date, regulators have considered climate change in their listing actions only for four animal species: the polar bear, American pika, American wolverine and Gunnison sage-grouse. Tidestrom’s lupine is different, and not just because it’s a plant. It’s from a more seasonally mild coastal area, not somewhere that one might think would be rocked by a few degrees of rising temperatures. The animals that have been previously considered all occur in arctic, alpine or arid regions.

“While our results on Tidestrom’s lupine could be an isolated case, they suggest that the extinction threat posed by climate change might be overlooked in temperate biomes,” Pardini said.

The delicate, purple-flowering lupine is part of a dune ecosystem along the west coast of the United States that is highly disturbed. In many of these coastal places, people have planted exotic plants to be able to develop and farm closer to the beach. Over time, exotic plants have over-stabilized dunes, disrupting wind and sand movement and harming plants and animals.

For the new study, Pardini worked with Tiffany Knight and Aldo Compagnoni, both of Martin Luther University Halle-Wittenberg and the German Centre for Integrative Biodiversity Research in Germany. Pardini and Knight have been tracking populations of Tidestrom’s lupine at Point Reyes since 2005. Compagnoni joined the team as an expert in demographic modelling incorporating climate data.

The scientists produced population trajectories for all populations of the species at Point Reyes for the next 30 years.

“Using 14 years of demographic data from 2005 to 2018 and model selection, we found that survival and fertility measures responded negatively to temperature anomalies. We then produced forecasts based on stochastic individual-based population models that account for uncertainty in demographic outcomes,” said Compagnoni, first author of the new study.

This scenario is conservative, as even more dramatic increases in temperature than 1° C are projected for this region of California in the next 30 years.

Compagnoni says: “Despite large uncertainties, we predict that all populations will decline if temperatures increase by 1° Celsius. Considering the total number of individuals across all seven populations, the most likely outcome is a population decline of 90%. Moreover, we predict local extinction is certain for one of our seven populations.”

“Our species has a range so small that its response to climate cannot be inferred from its geographic distribution. In these cases, long-term data collection becomes an important alternative option to assess the climatic vulnerability of a species,” explains Pardini.

Some rare species that are endemic to coastal habitats are currently protected by the Endangered Species Act and by various state listings. Many Tidestrom’s lupine populations are protected against development because they occur in a national park or state parks. However, there is general concern about the proposed new regulations that would allow coastal habitats to be excluded in the future because they are economically valuable to developers. Coastal plant communities provide a wide variety of valuable ecosystem services, such as mitigating the effects of coastal erosion and flooding.