Turn the Volume Down: Noise Pollution Affects Trees Too

Scientific studies are beginning to prove that several species are altering their behaviour in response to the increase in volume.

By Alex Taylor on 1st August 2012 in Ecology, Environment, Research 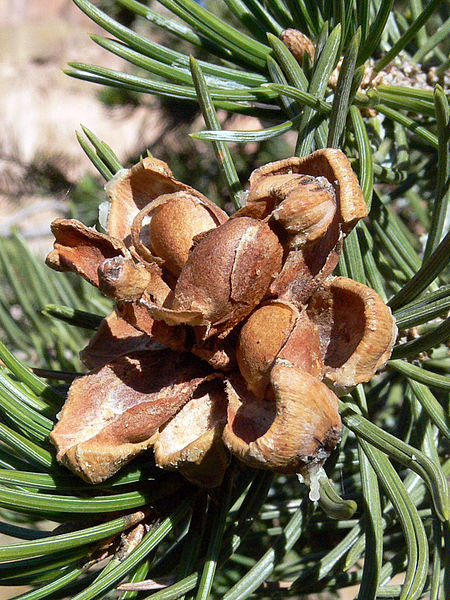 Image: By S. King, US NPS (Piñon Pine cone with seeds at US NPS) [Public domain], via Wikimedia Commons

In our increasingly developed and industrialised world, noise pollution is on the rise. With the growth of motorways, air traffic, construction and other human activities, scientific studies are beginning to prove that several species are altering their behaviour in response to the increase in volume. Yet where these have shown the effects on single species, one new study has focused on the entire ecosystem and found that, even without ears, plants are also suffering.

In the last few years in many of the world’s loud places, it has been discovered that birds sing at higher frequencies, whales must vocalise at a higher volume to communicate with each other, and bats and frogs are finding it hard to locate prey. But if one species impacted by noise plays an important role in an ecosystem, then the entire ecosystem will be affected.

A study published in the journal Proceedings of the Royal Society B, examined the effects of noise on entire communities in a woodland in New Mexico, USA. The western-scrub jay is an important disperser of piñon pine seeds. Each bird picks up thousands of seeds in autumn and hides them in stashes to eat over the winter, but inevitably, not all are found so some grow into new trees. From previous research, scientists from the National Evolutionary Synthesis Center in North Carolina already knew that these birds avoided noisy areas, so built upon this knowledge to test the effects on seed dispersal. They placed 20 seeds under 12 piñon pine trees – six in quiet areas and six in noisy areas – and used camera traps to see what animals were taking them. Under quiet trees, the jays collected the seeds, but in noisy areas the jays were nowhere to be seen. Instead, it was mice that ate these seeds, bad news for the trees because the seeds are instantly eaten by mice and don’t survive the journey through their digestive tracts.

Therefore, noise pollution has caused the jays to leave the area, resulting in less seed dispersal and causing the piñon pines to slowly decline. This was confirmed by the researchers, who found four times as many pine seedlings in the quieter areas compared to the noisy ones. This change may have gone undetected for many years but is a serious threat not only to the trees, but to all the species that depend on this habitat for survival.

This important piece of research has shown that the effects of noise pollution can be felt throughout entire ecosystems, and has highlighted the need for more research on this issue. It also means that money must be invested in quieter versions of technologies in order to protect ecosystems and the services they provide.