A species previously believed to be lost to science has been re-discovered. The silver-backed chevrotain was seen for the first time in 25 years on camera trap footage in Vietnam. Scientists will now study the population to determine its size and the threats to its survival. 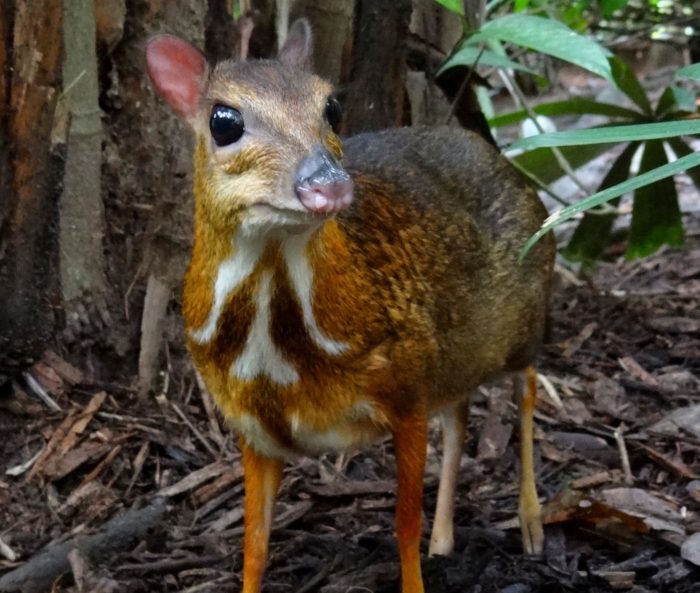 Global Wildlife Conservation (GWC) and partners Southern Institute of Ecology and Leibniz Institute for Zoo and Wildlife Research have rediscovered a species lost to science since 1990 called a silver-backed chevrotain – a deer-like species the size of a rabbit. The silver-backed chevrotain, also called the Vietnamese mouse deer, was last recorded more than 25 years ago.

The rediscovery in was published in the journal Nature Ecology & Evolution and is spurring on efforts to protect the chevrotain and the other mysterious and extraordinary wildlife that shares its home in Vietnam.

An Nguyen, associate conservation scientist for GWC and expedition team leader, said: “We had no idea what to expect, so I was surprised and overjoyed when we checked the camera traps and saw photographs of a mouse deer with silver flanks. For so long, this species has seemingly only existed as part of our imagination. Discovering that it is, indeed, still out there, is the first step in ensuring we don’t lose it again, and we’re moving quickly now to figure out how best to protect it.”

The silver-backed chevrotain was described in 1910 from four individuals collected from southern Vietnam. A Russian expedition in 1990 in central Vietnam collected a fifth individual. Scientists know almost nothing about general ecology or conservation status of this species, making it one of the highest mammal conservation priorities in the Greater Annamite mountains, one of GWC’s focal wildlands.

After several interviews with local villagers and government forest rangers who reported seeing a gray mouse deer – the colour distinguishing the silver-backed chevrotain from the more common lesser mouse deer – the field team set three camera traps for five months in an area of southern Vietnam where locals indicated they may have seen the animal. This resulted in 275 photos of the species. The team then set up another 29 cameras in the same area, this time recording 1,881 photographs of the chevrotain over five months.

“The rediscovery of the silver-backed chevrotain provides a big hope for the conservation of biodiversity, especially threatened species, in Vietnam. This also encourages us, together with relevant and international partners, to devote time and effort to further investigate and conserve Vietnam’s biodiversity heritage,” said Hoang Minh Duc, head of the Southern Institute of Ecology’s Department of Zoology.

There are 10 known species of chevrotains in the world, primarily from Asia. Despite their common English names, chevrotains are neither mice nor deer, but the world’s smallest small ungulates (hoofed mammals). They are shy and solitary, appear to walk on the tips of their hooves and have two tiny fangs.

The silver-backed chevrotain is one of several fascinating species that live in the diverse tropical forests of Southeast Asia, where some species have been discovered only in the last few decades. This includes the antelope-like saola (the Asian “unicorn”), which was only discovered in 1992 and that no biologist has seen in the wild. Animals in this area of the world, however, are victims of a devastating hunting technique – the use of cheap and homemade wire snares. The level of indiscriminate hunting in the region has led to the widespread “empty forest syndrome” across Vietnam, pushing numerous Annamite species to the brink of extinction.

A team is now setting out to determine how large, and stable, this population of silver-backed chevrotains is, assess the wider distribution of the species and explore the threats to its survival. As part of the first-ever comprehensive survey on the species, the team began camera trap surveys in October in two additional areas. They will use all the information that they gather to develop a conservation action plan that strengthens enforcement and protection of the species across its range, building on the increased enforcement already put in place at the site of rediscovery.

Barney Long, GWC senior director of species conservation, says: “It is an amazing feat to go from complete lack of knowledge of the wildlife of the Greater Annamites 25 years ago to now having this question mark of the silver-backed chevrotain resolved. But the work is only beginning with the rediscovery and initial protection measures that have been put in place – now we need to identify not just a few individuals on camera traps, but one or two sites with sizable populations so that we can actually protect and restore the species.”