The reason for the abrupt exit is a rise in water levels of as much as 2 metres to a high last experienced over 60 years ago. As water levels increase, the salinity of the water is reduced, which in turn reduces the abundance of algae. 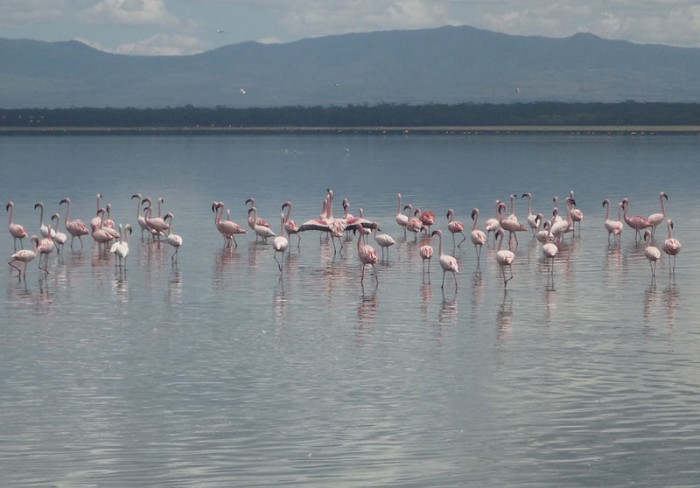 Image: By Lmwangi (Own work) [CC-BY-3.0 (http://creativecommons.org/licenses/by/3.0)], via Wikimedia Commons

Lake Nakuru in Africa’s Rift Valley is one of Kenya’s major tourist attractions, the main draw being the thousands, sometimes millions, of greater and lesser flamingos that gather around the edge of the lake and nest along the shoreline. They are drawn to the lake because of the abundance of algae that thrives in the warm water, on which they feed at a rate of approximately 250,000 kg per hectare of surface area per year.

Yet, the Kenya Wildlife Service reported that earlier this month a million flamingos have moved from Lake Nakuru to Lake Bogoria, about 100km further north. Just a few hundred flamingos remain, along with other birds such as pelicans, storks and gulls that make up the over 450 species of birds found at the lake. The reason for the abrupt exit is a rise in water levels of as much as 2 metres to a high last experienced over 60 years ago. As water levels increase, the salinity of the water is reduced, which in turn reduces the abundance of algae.

Ironically, Nakuru in the Maasai language actually means “dust or dusty place”, and the lake has experienced problems of drought in the past. In the early 1990s, the lake’s water level dropped dramatically. In just 3 months in 1993, tens of thousands of flamingos died during a drought, and in 2000, the flamingos dead at Lake Nakuru numbered 40,000. The current rise in water level will have seriously ecological implications on the wildlife of Lake Nakuru National Park (established in 1961), as well as the flamingos that are already experiencing a decline in their numbers.

This change in the water level has been attributed to a number of factors including climate variability and an increasing human population. Land use changes in the 1,800 square kilometre catchment area are also having an effect – excessive nutrients entering the lake, degradation caused by deforestation, inappropriate land use changes causing siltation and eutrophication, and fluctuating amounts of water entering the lake due to inflow rivers and declining ground water because of inadequate water conservation measures.

Hopefully the water level will soon return to normal and the relocation of the flamingos is a temporary one. In the meantime, with grasslands and acacia forests submerged, viewing of the other wildlife in the national park, such as hippos, buffaloes and baboons, has become a whole lot easier.