As well as hunting, their populations have fallen due to an increase in the practice by local farmers of releasing cattle indiscriminately into national parkland for retrieval later in the year, which has damaged their habitat.

By Alex Taylor on 15th May 2013 in World Conservation Issues 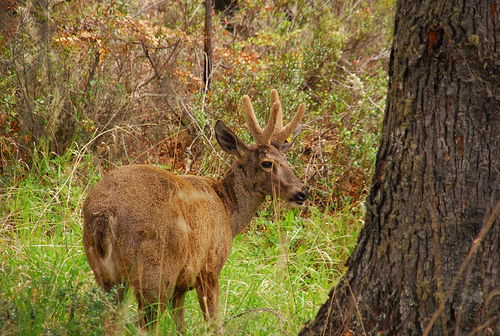 The huemul is a species of deer not known to many outside South America. It lives in the region of Patagonia and features on the Chilean coat-of-arms. With short legs and a stocky build it is well adapted to the rugged, forested mountainous terrain it inhabits. It is also a naturally tame animal and is easily approachable, making it vulnerable to hunting, especially with the arrival of European colonists.

Huemul are estimated to have suffered a reduction in population size of 99% since the 19th Century, according to the IUCN. It is believed by scientists that 50% of this decline has happened in the past few years, and that there are now only 2,500 huemul left in the wild. As well as hunting, their populations have fallen due to an increase in the practice by local farmers of releasing cattle indiscriminately into national parkland for retrieval later in the year, which has damaged their habitat.

A new study (published in the journal Oryx), however, has revealed that the joint efforts of conservationists and the Chilean government are bringing the huemul back from the brink of extinction. Researchers from Cambridge University, the Wildlife Conservation Society, and CONAF (the Chilean national forestry commission) have proved that by controlling cattle farming and by policing within the Bernardo O’Higgins National Park (covering 3.5 million hectares), the deer are able to return to areas of natural habitat from which they had completely disappeared.

A small number of field stations have been created in the remote tip of South America to provide a base for monitoring endangered species and natural habitats. Now, a team of park rangers enforce conservation laws that have never previously been policed on the ground, even though they have been in place since the 1960s. The impact of these measures was seen almost immediately. Within just five years, from 2004-2008, the huemul population in the Bernardo O’Higgins National Park has stabilised and has even begun to increase.

The recovery of the huemul is also one of the top priorities for Conservacion Patagonia, an organisation which is funding and managing a programme to track adults and fawns by using radio telemetry in order to better understand the little studied deer’s survival rates, population trends and social behaviour.