The Highs and Lows of Florida Panther Recovery

Today, the total population of Florida panthers is estimated to be between 100 and 160 animals. Sadly, this increase in numbers has resulted in more panthers becoming involved in vehicle collisions on Florida’s roads. 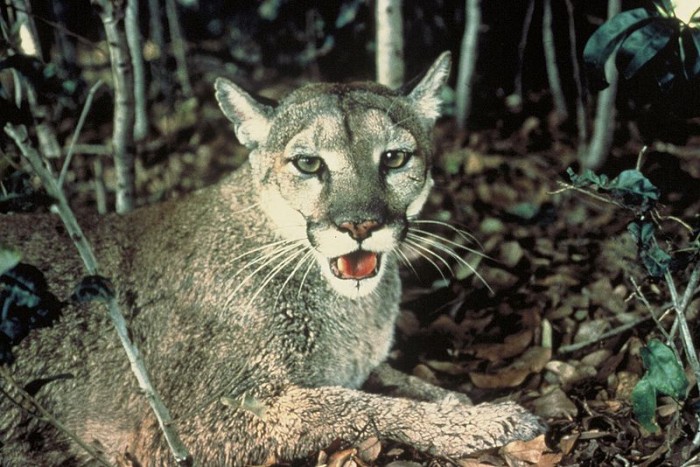 I’m staying with the subject of roads and the serious impact vehicle collisions can have on wildlife populations for this week’s blog. The focus will be the Florida panther, one of North America’s most magnificent yet most threatened mammals.

This species almost disappeared in the 1980s, when numbers of Florida panthers had dwindled to just 20-30 individuals. As they require areas as large as 200 square miles to roam in, habitat loss posed a huge threat. Between 1935 and 1990, the human population in south Florida grew by 4.7 million people, and by 1990, five of the fastest growing cities in the USA were in south Florida. Development, urbanisation and large-scale intensive agriculture such as citrus groves meant that less habitat was available for the Florida panthers, but the increase in people also caused habitat degradation. Deer are the panther’s main prey item and are essential for their survival, but non-native plants such as the Brazilian pepper reduce the deer’s food, and fire suppression decreases the new plant growth that the deer prefer.

Decreases in habitat and in numbers of Florida panthers caused serious inbreeding, but in 1995 a programme to restore the gene flow was implemented. Eight female Texas cougars, a species which breed naturally with Florida panthers where their ranges overlap, were introduced to the Florida panther population and produced offspring. Today, the total population of Florida panthers is estimated to be between 100 and 160 animals. Sadly, this increase in numbers has resulted in more panthers becoming involved in vehicle collisions on Florida’s roads.

This year, there have been 24 documented deaths, with more than half (16) being attributed to car accidents. This is just one short of the highest recorded number of road kills in one year – in 2009, 17 were reported. There are two main causes of Florida panther deaths, one being fighting with other panthers when defending their territory, a natural phenomenon, the other being collisions with vehicles, an entirely human-related cause of death. These usually occur at night, when the panthers are most active, and visibility for drivers is poor.

The Florida Fish and Wildlife Conservation Commission are now urging motorists to be on the lookout for panthers when on the road, and to report any accidents or sightings. In April this year, a new ‘slow speed nighttime panther zone’ was created in Hendry County. A 5.25-mile stretch of road bisecting the Okaloacoochee Slough State Forest that is very dangerous for panthers has now had its speed limit reduced at night from 55 to 45 miles per hour. Conservation organisations supporting the new speed limit, such as Defenders of Wildlife, hope that it will raise awareness about the need to drive carefully and watch out for wildlife.

Last year, the number of Florida panther kittens born offset the number of animals that died. However, with numbers of this endangered species still so low, every individual killed on Florida’s roads represents a significant loss to the recovery of this iconic big cat.