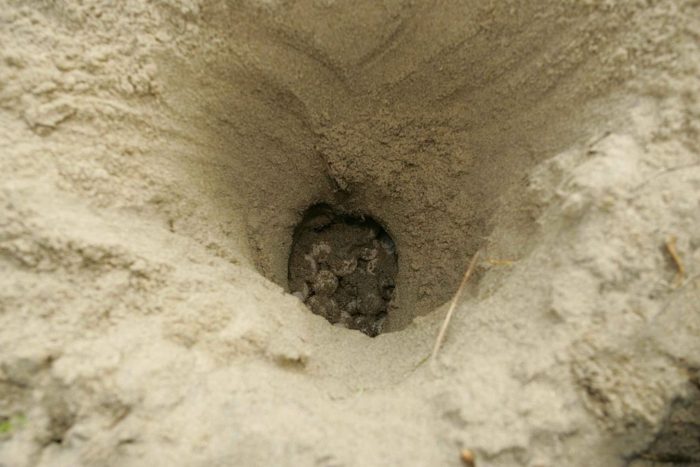 Marine biologists from the University of Central Florida Marine Turtle Research Group have released estimates of sea turtle nests lost to Hurricane Irma. Within the Archie Carr National Wildlife Refuge – one of the most important nesting sites in the world – 56% of green turtle nests and 24% of loggerhead turtle nests were lost. Both are endangered species.

The researchers found significant dune erosion that swept away some nests and exposed the eggs of others. It had been a record year for green turtle nesting along the refuge’s beaches in southern Brevard County, but a storm surge due to Hurricane Irma destroyed many nests, as well as unhatched loggerhead turtle eggs. It is estimated that, of the nests laid before the end of September, more than half of the season’s green turtle nests and a quarter of loggerhead nests were lost.

Both green and loggerhead turtles are listed as threatened under the US Endangered Species Act, and endangered on the IUCN Red List of threatened species, and Florida hosts the majority of both species’ US nests. The 13-mile section of the Archie Carr National Wildlife Refuge monitored by the University of Central Florida (UCF) hosts about a third of Florida’s green turtle nests.

“Last year with Hurricane Matthew, we lucked out because it was a low green turtle year,” said Kate Mansfield, assistant professor and director of the UCF Marine Turtle Research Group, noting that green turtles typically have alternating high and low nesting years. “This year was an extraordinarily exciting year for green turtle nesting, breaking all previous records within the refuge and continuing the conservation success story for the species. Unfortunately, we had another big hurricane this year, highlighting the need for continued conservation efforts in the area.”

Along some stretch of beach, loggerheads laid 9,690 nests in 2017, but thankfully most had already hatched when Hurricane Irma passed through the region. However, an estimated 2,290 loggerhead nests were still lost. This is 24% of the total of loggerhead nests there and 91% of those nests that were still incubating when the hurricane-driven storm surge came ashore.

The refuge is located at the northern extent of dense leatherback turtle nesting in Florida, but the species nest in far fewer numbers there, laying just 23 nests in 2017 in the UCF monitored portion of the refuge. Yet they nest earlier than both green and loggerhead turtles so all leatherback nests had finished incubating before the hurricane.

UCF also monitors another 16.4 miles of beaches north of the wildlife refuge, at Patrick Air Force Base and in central Brevard County. Considerably fewer nests are laid there than in the Archie Carr National Wildlife Refuge, but the numbers are still high compared to many other parts of the country. On those beaches, an estimated 642 of 2,251 green turtle nests and 831 of 6,229 loggerhead nests were lost due to the hurricane.

The UCF Marine Turtle Research Group also found evidence that some green turtle hatchlings have emerged since the hurricane. And some turtles have continued to come ashore and lay new nests. Within the wildlife refuge, 466 new green turtle nests and eight new loggerhead nests were laid in September following Irma. Along the other UCF-monitored beaches, 72 new green nests and three new loggerhead nests were laid.

Nevertheless, the nests aren’t out of danger. “Green turtles are still nesting, but recent extremely high tides have likely wiped out many of those new nests, too,” said Erin Seney, an assistant research scientist with the UCF group. “The good news is that the nesting habits of sea turtles do protect them from large-scale nest loss and make them more resilient to this kind of event. They lay multiple nests per nesting season, roughly every other year for 30 years or more.”

UCF researchers have run a sea turtle monitoring and research program on the beaches of the Archie Carr National Wildlife Refuge in southern Brevard County for 35 years – their findings about turtle nesting activity are among the reasons the refuge was created in the first place, back in 1991.

Threats to sea turtles are ever present today. The greatest threat is incidental capture in fishing gear, also known as bycatch. Longlines, containing thousands of baited hooks on lines that can be tens of miles long, hook and entangle many animals and fish that are not intended to be caught.  Sea turtles, particularly greens, loggerheads, olive ridley’s, and leatherbacks, are attracted to the bait and get caught on the hooks or become entangled in the lines and drown. Many also get caught in shrimp trawl nests. Despite laws protecting sea turtles in most countries, the illegal trade of eggs, meat, and shells of turtles continues to be a threat. In many parts of the world, these animals are harvested for their meat and eggs which are used for human consumption and in some places are considered a delicacy. Tens of thousands of green turtles are harvested every year.

Coastal development and human activities along coastlines also threatens sea turtles. This forces nesting females to use other beaches, changes the properties of nesting beaches, and contributes to the pollution of sea turtle habitat from runoff and wastewater discharge. Plastic ingestion is another major problem and climate change will impact sea turtles on a vast scale. Sea level rise from the melting of polar ice is already contributing to the loss of beach and sea turtle nesting habitat and, as shown by the figures released by the UCF biologists, weather extremes linked to climate change will result in more frequent and severe storms, with devastating results.