Home › Articles & Blogs › The Invasion of the Burmese Python

The Invasion of the Burmese Python

Their presence in such huge numbers has led scientists to try to discover the impact of this invasive species on the natural ecosystem and native species living in the park. 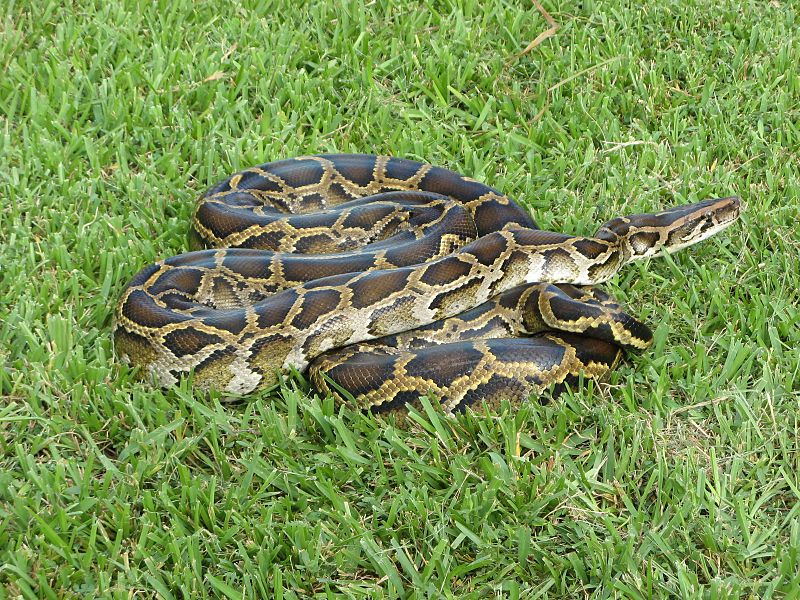 There are estimated to be tens of thousands of Burmese Pythons living in the Everglades National Park in southern Florida. They have been living there for decades, the first animal was discovered in 1979. They are native to the jungles and grassy marshes of Southeast Asia, and are among the largest snakes on earth – they weigh up to 200 pounds (90 kg) and measure more than 23 feet (7m) in length. Preying primarily on small mammals and birds in their native home, they kill by constriction. They are listed as vulnerable by the IUCN because their numbers are being reduced because of habitat depletion, hunting for their skins and flesh, and the continued demand for the international pet trade. It is their patterned skin and generally docile nature that has made them a firm favourite among reptile owners. Yet they are often poorly cared for and are frequently released into the wild, accidentally and/or intentionally, resulting in the large numbers now found in Florida.

Since 2002, over 2,000 Burmese pythons have been removed from the Everglades National Park, but this is thought to be just a fraction of the total population living there. Their presence in such huge numbers has led scientists to try to discover the impact of this invasive species on the natural ecosystem and native species living in the park.

One study, published in the Proceedings of the National Academy of Sciences, has linked the declines in formerly common mammalian species in the park to the presence of Burmese pythons. This research was the first to document the ecological impact of the snakes. Scientists conducted night-time road surveys between 2003 and 2011, counting live and road-kill animals. They compared their results with similar surveys conducted in 1996 and 1997, before the pythons were recognised as established in the Everglades. Their findings indicated that mid-sized mammals are most dramatically affected, with the most severe declines occurring in the remote southernmost regions of the park. In this area, populations of raccoons have dropped by 99.3%, opossums by 98.9% and bobcats by 87.5%. Marsh and cottontail rabbits and foxes have completely disappeared. At sites where the pythons have only recently been documented, populations of mammals were reduced but not to the dramatic extent as in areas where the snakes have been established for much longer.

These substantial declines in such a short time scale of just 11 years are thought to have occurred because native prey species are “naïve” – they are not used to being preyed upon by Burmese pythons since the snakes have not previously existed in the Everglades. But Floridian mammals are not the only ones at risk, as the pythons also pose a threat to native birds.

In fact, birds account for 25% of the Burmese python’s diet in southern Florida. By examining the contents of the digestive tracts of pythons, scientists have shown that at least 25 different species of birds in the Everglades are consumed by the snakes, including the endangered wood stork. What is even more worrying is that research conducted by Smithsonian scientists was the first to discover that Burmese pythons are also eating eggs straight from the nest. Those who conducted the research state that this is a “significant finding as it suggests that pythons are not simply a sit-and-wait predator but is opportunistic enough to find the nests of birds.” Especially as one snake examined by University of Florida scientists in 2012 had 87 eggs within its body.

The scientists used DNA to test the membrane of crushed eggs found within pythons, and compared egg shell fragments with egg specimens in the Smithsonian’s collection to determine what one female python collected for the study had eaten. What it had eaten was the eggs of the limpkin, a large wading bird listed as a “species of special concern.” Therefore, these snakes have the potential to negatively affect the breeding success of native birds.

It is clear from all of this research that where Burmese pythons go, native species suffer. It had previously been thought that salt water would naturally hinder the python’s ability to spread any further, since reptiles in general have a poor salinity tolerance. However, it is now known that hatchlings can withstand exposure to salt water long enough to potentially expand their range through marine and estuarine environments, such as bays, inlets and open seas. Research published in the Journal of Experimental Marine Biology and Ecology found that the hatchlings are able to survive for one month in salinity levels equivalent to full marine water and five months with salinity levels comparable with estuaries. As the hatchling stage is the most vulnerable stage of the python’s life, it is likely that adult snakes could survive even longer. This raises the concern that Burmese pythons could spread into nearby islands, and spread further into the Florida Keys (the first python was discovered there in 2007).

Nothing, it seems, will stop the spread of Burmese pythons except human action. To help solve the problem of this invasive species, the Nature Conservancy in Florida launched Python Patrol in 2008. The organisation has now trained over 400 responders who can deal directly with a reported python by safely and humanely capturing it and taking it to a designated recipient for research or training. Responders are taught to utilise the snake’s lack of endurance to make capturing them easier. Burmese pythons expend a lot of energy in short bursts to ambush their prey, so responders pull the escaping python by the tail repeatedly to tire it out and then grab it firmly at the base of the head, avoiding the writhing body getting wrapped around their legs.

The Florida Fish and Wildlife Conservation Commission now co-ordinates Python Patrol, and citizens can report snake sightings by calling them, reporting it on their website, or using a free IveGot1 app. Anyone can learn to identify Burmese pythons and other non-native animals at a detector training course or online.

In 2010 a Nature Conservancy-backed measure was adopted in Florida to prohibit personal possession of seven large constrictors (including the Burmese python) and one large monitor lizard – all designated as “reptiles of concern” due to their impact on native wildlife. A ban on importing and trading Burmese pythons in Florida was also enacted in 2012. Prevention is crucial, an approach recognised by conservation organisations as being the most cost effective and efficient when dealing with invasive species, especially one so damaging and dangerous to natural biodiversity as the Burmese python.