N is for Nightjar

The jarring from which they take their name, more commonly referred to as churring – an eerie, mechanical sort of noise that’s straight out of a science fiction film, and possibly the strangest noise I’ve ever heard coming from a bird.

By Chris Foster on 23rd July 2012 in A to Z of British Birds, Bird Conservation 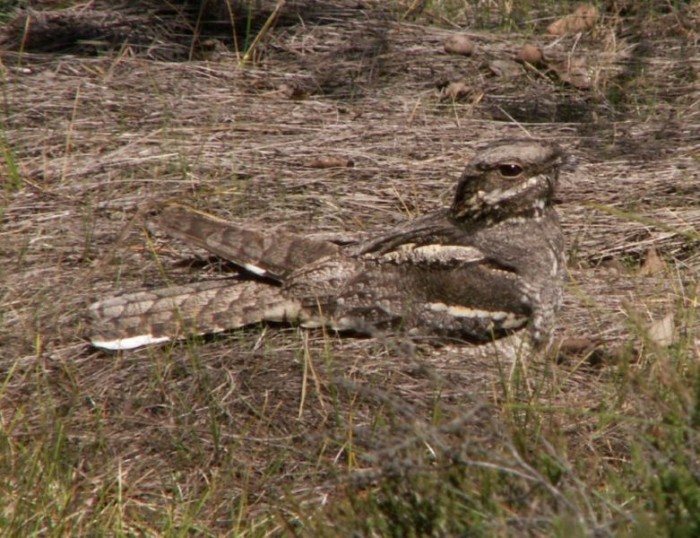 The nightjar is a species so mysterious, so wreathed in legend and half-facts that it’s collected more folk names than any other bird I can think of: Goatsucker. Flying toad. Puckeridge. Jenny-spinner. Flying toad. Moth-owl. Dewfall hawk. Needless to say, the non-mythical, wonderfully real version is not known to have developed a taste for dairy produce. But, as so often in the world of birds, the truth is hardly any less incredible.

Let’s start with their incredible ‘song’:  the jarring from which they take their name, more commonly referred to as churring – an eerie, mechanical sort of noise that’s straight out of a science fiction film, and possibly the strangest noise I’ve ever heard coming from a bird. Males start performing around dusk, usually from a prominent perch overlooking one of their various preferred open country habitats. When the sound stops, it’s often because the bird has taken flight, which is when to start looking for the nightjar’s hawk-like silhouette rising ghostlike above the treeline.

It won’t be possible to make out details of their highly camouflaged and indeed beautiful plumage, which keeps them safe on the ground by day, but what you may see are white patches on the tips of the male’s wing and tail – warning flashes for rivals which look almost like aircraft landing lights, glowing in the half light. One oft-repeated piece of advice when seeking out nightjars is to carry a white cloth or handkerchief and wave it in imitation of those patches in order to trick a male into thinking an intruder has entered his territory, thus luring him over to investigate.

So it was that one evening last June I ventured forth with friends into a likely spot for nightjars in Berkshire, a white tea towel tucked into my back pocket. Not expecting much, we tried a few experimental flaps of the cloth, and as if summoned by some dark ornithological magic a nightjar emerged out of the dark, swooped low, called loudly above our heads and alighted in a nearby tree.  Searching for nightjars should surely be an indispensable event in any birdwatching year.