Orcas and Dolphins in Captivity

Capturing a wild animal is traumatic for any species but for social species like orcas and dolphins it is likely to be a horrifying event that may last a life time. 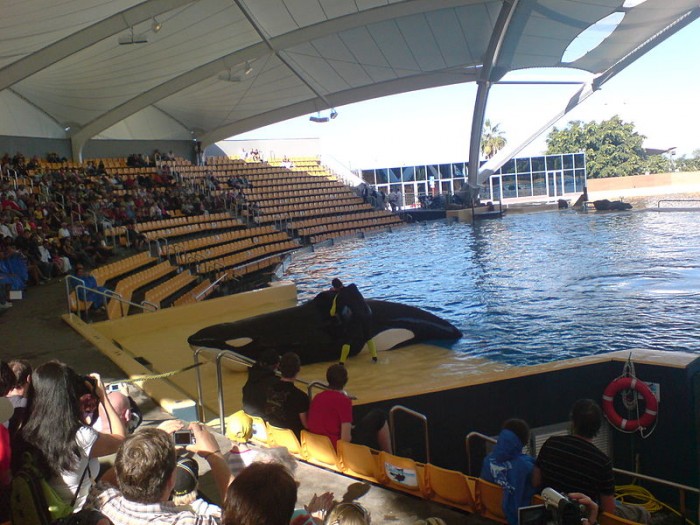 Image: By Idontknow09 (Own work) [Public domain], via Wikimedia Commons

Aquariums and marine parks are often seen as a harmless educational source of fun. In fact they are part of billion-dollar industry built on the pain and suffering of some of the most intelligent and social animals on the planet.

Many of the orcas and dolphins performing in aquariums around the world were once free, living in their natural environment. In the wild they spend their lives in family pods and develop very strong bonds. Orcas and dolphins have been found to communicate with each other and it has been suggested that orcas may even have regional dialects. Capturing a wild animal is traumatic for any species but for social species like orcas and dolphins it is likely to be a horrifying event that may last a life time.

Often the capture event is very violent, adding to the trauma of being torn away from a family group. Pods are chased to the point of exhaustion by people in boats and helicopters using harpoons and explosives. When the pods can no longer swim or become cornered the capture groups surround the pod and take the animals they want; many die of shock or injury during this process.

In their natural environment orcas and dolphins can swim up to 100 miles per day. They spend very little time at the surface of the water, just 10 to 20% in fact. Captive orcas and dolphins, however, are restricted in a tank that can measure a mere 24ft by 24ft and a depth of only 6ft. For an animal that is able to dive over 1,640ft this is clearly inadequate. Captive orcas and dolphins spend more than half of their time motionless or swimming around in circles. It has been suggested by experts that this may cause the collapsed dorsal fin in captive orcas.

When these animals are not swimming in circles in their inadequate enclosures they are performing tricks for paying customers. Jumping through hoops, performing jumps and worst of all being used as skis with a trainer stood on their backs as they are made to swim on the surface of the water – it’s difficult to think of a more demeaning act.

Keeping orcas and dolphins in captivity in the UK ceased in 1993 because new regulations imposed relating to tank size meant keeping dolphins was too expensive. However, many other countries around the world still profit from the capture and imprisonment of these beautiful creatures.

If you believe this is wrong, please sign the petition below and spread the word. Most importantly stay clear of aquariums boasting dolphin or orca shows; those animals may be going through the misery you have just read about.