Findings suggest that if drainage continues, there will be a continued decline in the breeding habitat for piping plovers at wetlands in the Great Plains.

By Alex Taylor on 2nd December 2015 in Bird Conservation 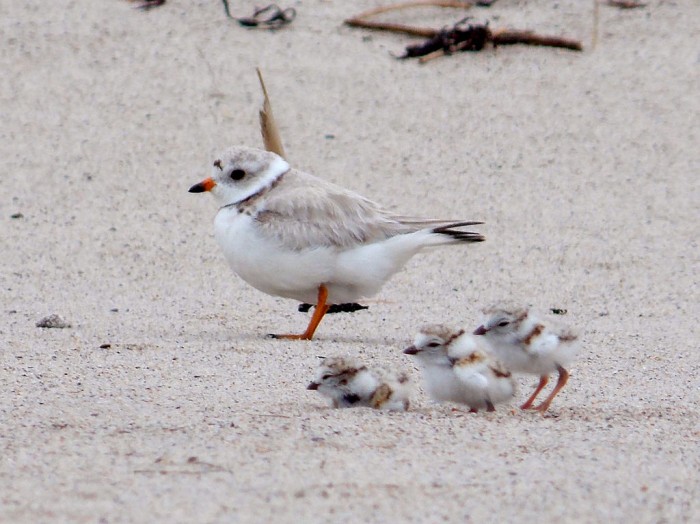 Piping plovers are a threatened species of shorebird. A new US Geological Survey (USGS) study has shown that they are losing wetland habitat on the Great Plains in North America as a result of wetland drainage, climate change, or both.

The study, published in the Journal of Fish and Wildlife Management, examined data from piping plover surveys from 1979 to 2011 for 32 wetland areas in the Prairie Pothole Region of North Dakota. In some areas, consolidation drainage had taken place. This is the drainage of smaller wetlands into another wetland, typically for agricultural purposes. The result of consolidation drainage is that there are fewer and fuller wetlands, with less shoreline. Given that it is the shorelines that piping plovers use to nest, this will result in less habitat for the birds, and population declines.

Piping plovers breed on wetland or reservoir shorelines and river sandbars in the northern Great Plains. The climate varies across this region, so when rivers or reservoirs are flooded, unflooded prairie wetlands can provide habitat, and vice versa. But consolidation drainage has reduced the population of piping plovers. The study found that the probability of their presence was 99.6% greater for wetlands located in undrained watersheds compared to wetlands where 10% of the watershed had been drained.

“Our findings suggest that if drainage continues, there will be continued declines in the amount of breeding habitat for piping plovers at wetlands in the Great Plains. Managers can use information from our study to better restore and conserve valuable wetland ecosystems for the protection of this species,” said Lisa McCauley, who led the study as a USGS postdoctoral student.

The fate of plover habitat is also tied to potential changes in climate. If precipitation increases in this region, the amount of wetland habitat for piping plovers could continue to decline. Natural wetlands throughout the world are under threat. According to World Wildlife Fund, nearly half of the world’s wetlands have disappeared since 1990. Alongside climate change, factors contributing to the loss include commercial development, invasive species, the construction of dams and pollution. Yet wetlands provide a range of benefits, such as erosion control and flood prevention, so are vital not just for piping plovers and the many species that depend on wetlands for survival, but for us humans too.