Rapid Recovery of the Island Fox

Island foxes, endemic to the Channel Islands off the southern coast of California, have been removed from the endangered species list following a rapid recovery.

By Alex Taylor on 6th September 2016 in Animal Conservation, Man Made Pollutants 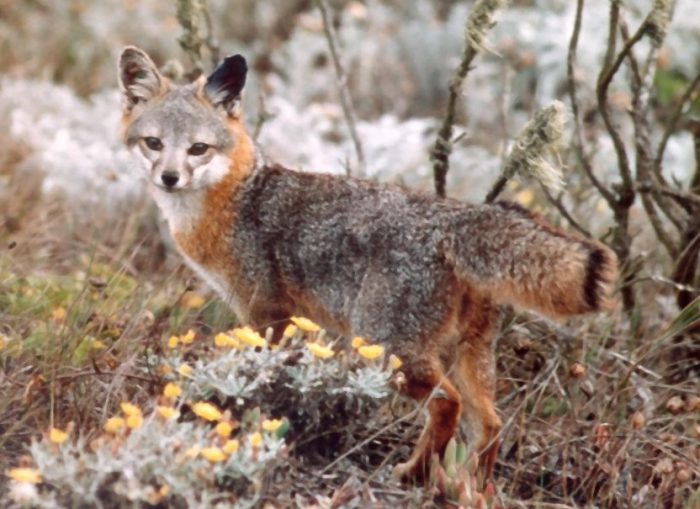 One of the smallest canids in the world (around the size of a domestic cat), island foxes thrived for around 6,000 years due to the lack of predators. But they suffered badly during the late 1990s, thanks to the use of the pesticide DDT. This wiped out bald eagles on the islands, a bird that the foxes co-existed with because they ate fish. Golden eagles then replaced bald eagles, which preyed on the foxes. This, combined with the disease canine distemper which swept through the fox population, led to a crash in numbers. The population on Santa Cruz Island fell to 55 individuals, and on Santa Rosa to just 15 – a loss of 90% of the total population.

The island fox was listed as endangered in 2004. Since then the foxes have been bred in captivity and a new vaccination was given to the remaining population. Golden eagles were relocated, feral pigs removed and bald eagles were reintroduced, all of which resulted in the increase in numbers of island foxes. There are now 700 on San Miguel Island, 1,200 on Santa Rosa and 2,100 on Santa Cruz Island. The islands’ remoteness also played a key role in the foxes’ resurgence, giving scientists better control over recovery efforts than if they happened on the mainland

“The decline of the island fox, one of America’s rarest mammals, was rapid and severe,” said Jon Jarvis, director of the National Park Service. “Captive rearing, an unprecedented emergency action, was critical to saving the species. Efforts to restore balance to the island ecosystem ensured their survival.”

Federal officials from the US Fish and Wildlife Service said that the effort to save the island fox, which involved many conservation groups such as Nature Conservancy and Institute for Wildlife Studies, is the most rapid de-listing of a mammal in the 43-year history of the Endangered Species Act. The de-listing occurred just 12 years after they were first listed, for three subspecies – the Santa Rosa, Santa Cruz and San Miguel Island foxes. The next fastest was the Stellar sea lion, which was de-listed in 2013 after 23 years.

Foxes on Santa Catalina Island – a tourist destination – also are recovering but not as fast as their counterparts on the northern Channel Islands. Federal officials downgraded the status of the Catalina foxes from endangered to threatened because disease outbreak remains a concern.