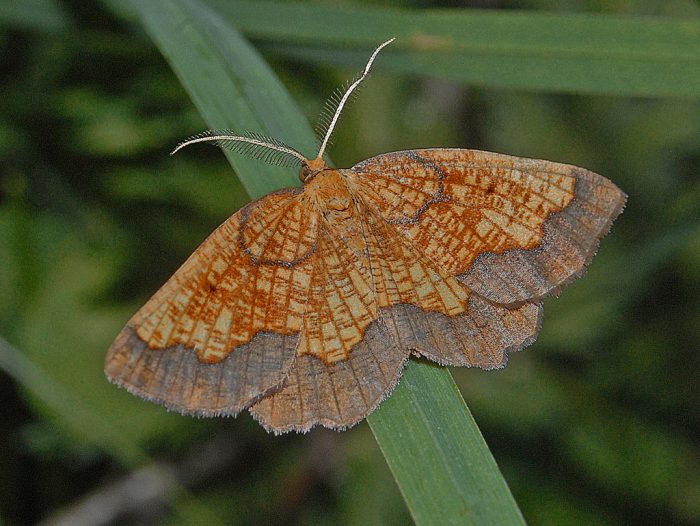 This tiny, rare species is found at a few sites in Scotland, including near Balmoral in Aberdeenshire and Strathspey, but its only population in England is found on Strensall Common – an area of protected lowland heath near York. A team of researchers that monitored this population between 2007 and 2014 have discovered that the number of adult moths has reduced by an average of 30-35% each year. Their results were recently published in the journal PLoS ONE. Prior to 2007, it has been estimated that the population of adults numbered between 500 and 1000 spread widely over the common, but now only 50-100 are thought to remain.

The rapid decline has been attributed to a reduction in the foodplant of the moth’s caterpillars, Creeping Willow. In 2009, a fire destroyed the most important area of plants for the moth and an increase in grazing pressure by sheep is likely to have had an impact on the breeding habitat throughout the Common. Sheep and other grazing animals are important on heathlands because they help to prevent the habitat from being overgrown with trees and tall shrubs. However, in this case it appears that this management strategy has unwittingly caused the decline of the Dark Bordered Beauty, a species the management was ultimately designed to protect.

Female moths prefer to lay eggs on large, robust plants in July, but the removal of Creeping Willow by grazing had led to a loss of habitat for the moths. It is also likely that sheep have inadvertently eaten moth eggs, which stay on the plant until late spring before they hatch.

Dr Peter Mayhew, co- author of the study from the University of York, said: “Our study indicates the potential conflict between generic habitat management and bespoke management for species. It is vital that monitoring programmes are integrated into site management so we can increase our knowledge of rare species that rely on such habitats in a specific way. We must also not be complacent when species are restricted to a single site, even if their population at first appears healthy.”

Co-author Dr Terry Crawford added: “The Dark Bordered Beauty is a very special and charismatic moth, which has been observed and admired at Strensall Common for well over a century. It has long been part of the natural history heritage of England and of Yorkshire. Because of the loss of populations elsewhere in England, the loss of the population at Strensall Common would mean extinction of the moth in England as a whole.”

But action is now being taken to try to save the moth. Dr Sam Ellis, Director of Conservation and Regions at the charity Butterfly Conservation says: “As a short term measure we are trying to boost the numbers and size of Creeping Willow plants on Strensall Common by planting out willows grown from local seed, and protecting them from sheep grazing. Hopefully this will help the moth population bounce back from its very low current level. We will continue to monitor the population with the help of volunteers, and ultimately we may need to modify the grazing regime at Strensall Common to make it more sustainable for the Dark Bordered Beauty. Further ahead, other populations need to be established outside of Strensall to secure the moth’s long-term future in England.”