Home › Articles & Blogs › Save the Nautilus

When their numbers are depleted it will take a long time for populations to recover. Better education on the consequences of purchasing Nautilus shells, more research and better regulation appears to be essential for their survival. We can only hope that it is not too late.

By Alex Taylor on 25th June 2014 in Marine Conservation, Research 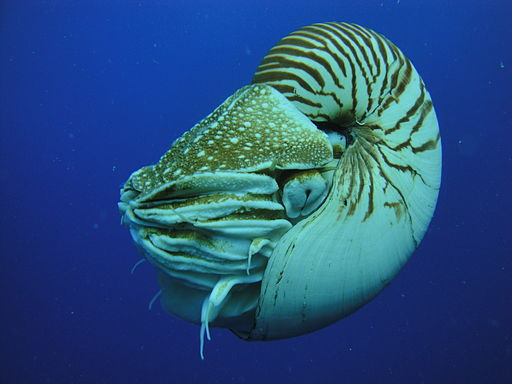 The Chambered Nautilus is known as a “living fossil”, which means that it has remained relatively unchanged for millions of years. This cephalopod (animals with no backbones but with tentacles or arms, such as the shrimp and the octopus) first appeared around 550 million years ago during the early Palaeozoic era, 265 million years before the dinosaurs.

They are found from southern Japan to the Great Barrier Reef, and from the Indo-Pacific to Samoa. Living at depths of 100 to 600 metres, they travel to shallower depths at night to feed on small fishes, crabs and carrion using their acute sense of smell. They grow to around 20 cm in length, with a spiral shell that holds up to 30 chambers, created as the animals increase in size and move to occupy the outermost chamber. It is changes in the amount of gas in the empty chambers that enables the Nautilus to adjust its buoyancy.

However it is their spiral shell, which is thin and smooth with a brown and white pattern, which makes the Nautilus highly desirable, and now threatened by extinction. They are heavily fished because they are easy to catch with baited traps on long lines, and they are traded internationally, even being sold on eBay. Since 1987, the export of Nautilus shells has been widely banned but many countries continue to sell them. A small percentage of them are also taken for the aquarium trade. An article published in the New York Times in 2011 reported on the trade in Nautilus shells and stated that the US imported 579,000 specimens from 2005 to 2008. It has also been stated that over the course of a two year period, as many as 10,000 live animals were caught and killed for their shells. Sales of earrings and ornaments are growing, made from the material from the Nautilus shell’s inner surface that is marketed as a cheap alternative to real pearl.

Recently, a palaeontologist from the University of Adelaide’s Sprigg Geobiology Centre has made a plea for a global ban on the trade of Nautilus shells. Professor Peter Ward is an expert on the Nautilus, and has conducted surveys of populations in many parts of the world including the Great Barrier Reef, Fiji and American Samoa using special underwater technology. He has just returned from the Philippines where, in areas known for Nautilus fishing, he discovered that the population there is close to extinction.

“The Nautilus situation we found in the Philippines was mind-boggling. The Philippines have been at the centre of Nautilus fishing for decades. Now it is just about extinct there. And it is not just Nautilus. In the same environment we found almost no larger fish at all where there should be large schools of many different species. We found Nautilus at rates of 10-15 per square kilometre in the Great Barrier Reef, but in the Philippines they were 100-200 times more rare than that-virtually extinct in the Bohol Strat and completely gone, as far as we could see, from three other classic fishing locations,” said Professor Ward.

In Australia, Nautilus shells sell for as much as AUS$200. “We know that the largest Nautilus in the world come from Western Australia, and we are seeing them being sold on eBay even though there is supposed to be regulation in Australia,” Professor Ward continued. “There is good reason for concern about Western Australia deep reefs.”

Professor Ward has taken his findings from the Philippines and other parts of the world to a meeting of the US Fish and Wildlife Service in Washington, D.C. The meeting was held to determine US policy on Nautilus trade before the next round of the Convention on International Trade in Endangered Species of Wild Fauna and Flora (CITES). The Service has also been conducting research, alongside the National Marine Fisheries Service, to better understand the Nautilus’ status in the wild and the effects that increased harvesting are having on the species. Both services are collaborating with other countries and researchers in order to share information and address the knowledge gaps on the conservation, trade, and management of Nautilus, better understand the ecology of the species and obtain population data, examine local fishery and market data fishery and regulations throughout its range, explore the cultural and economic significance of the Nautilus to local livelihoods and better understand the various Nautilus commodities and consumer groups.

Professor Ward believes we should be worried about the Nautilus’ disappearance and other threats to their habitat: “Nautilus is the ‘canary in the coal mine’ of the deep reef environment. It tells us about the health of our deeper reefs where little ecological study is done. When Nautilus isn’t there, we know that the other fish at those depths are also at risk from overfishing or other environmental factors. We cannot rule out high acidity and warming of these formerly cool, deep waters caused by climate change, and from rising levels of silt caused by nearby deforestation. Nautilus has survived every single mass extinction event that’s been thrown at it over half a billion years, now it’s being wiped out by humans to sit on a bathroom shelf or as a pretty button on someone’s shirt.”

Professor Ward has found assistance in his quest to protect this declining species. Josiah Utsch, aged 11, set up a website called savetheNautilus.com and a non-profit organisation after he read the previously mentioned article in the New York Times, entitled “Loving the Chambered Nautilus to Death.” He was later joined by his friend Ridgely Kelly, and together they ask on their website for help to “raise awareness of the plight of these beautiful creatures and stop the senseless killing for their coveted shell.” They raise money to fund Professor Ward’s research on his data gathering expeditions, to pay for supplies and boat rentals, for example.

Their work is of vital importance, as the decline of the Nautilus has largely gone unnoticed by the public. Their preference for living at depths below the range of sunlight means that Nautilus are also extremely difficult to study. Yet what scientists do know is that they are very slow growing, reach sexual maturity at 15-20 years of age and lay only a few eggs. Therefore, when their numbers are depleted it will take a long time for populations to recover. Better education on the consequences of purchasing Nautilus shells, more research and better regulation appears to be essential for their survival. We can only hope that it is not too late.