Home › Articles & Blogs › The Invasion of the Chinese Mitten Crab

The Invasion of the Chinese Mitten Crab

It is thought that they were accidentally introduced to Europe and North America in the sediment found on the bottom of ships ballast tanks.

By Amy Featherstone on 29th January 2013 in A to Z of Invasive Marine Species, UK Conservation Perspectives 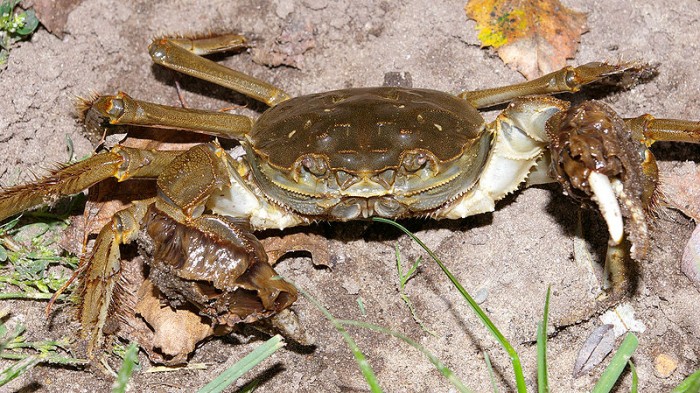 Image: By Christian Fischer. (Own picture, made in western Brandenburg, Germany.) [CC-BY-SA-3.0 (http://creativecommons.org/licenses/by-sa/3.0)], via Wikimedia Commons

When presenting my thesis the other week, someone (in a rather panicky voice) asked me whether I had seen any Chinese Mitten Crab megalopae in my sampling. There was a wave of relief around the room when I said no, all the expected species were there and none I couldn’t identify. This perked my interest to the crabs and why they are such a problem in UK waters.

The Chinese Mitten Crab (Eriocheir sinensis) is a native to the estuaries of eastern China and is named due to its furry claws that look like its wearing mittens. It is thought that they were accidentally introduced to Europe and North America in the sediment found on the bottom of ships ballast tanks. As they are a burrowing species, this habitat is almost perfect for them. From there they have migrated all around Europe, where they have been detrimental to local environments. In China they migrate up to 1,500 kilometres along some rivers and have even been seen to leave the water, cross dry land and enter a new river systems.

As this species is recognised as invasive, there has been concerns raised about whether it competes with local species, and whether its burrowing nature damages embankments and clogs drainage systems. As stated before, the crabs can make significant inland migrations. It was reported in 1995 that the residents of Greenwich saw Chinese mitten crabs coming out of the River Thames and moving towards the High Street. They have also been found in swimming pools. In other countries, the crabs have been found hundreds of miles from the sea. This is a major concern to areas which have a native crab fishery, as the impact of this species on any native populations is unknown.

The Chinese Mitten Crab has been the most detrimental to Germany. Here they destroy fishing nets, injure native fish species and damage local dams. The total cost of these damages has been estimated at around 80 million Euros. These crabs migrated from China to Europe as early as 1900, and were first documented by official German reports in 1922. The mitten crabs are the only freshwater crab species in Germany, and their tendency to dig holes has caused damage to industrial infrastructure and dams where it has been known to bury up to 2 feet deep.

In order to reduce the amount of Chinese Mitten Crabs in our waters, the Museum of Natural History are encouraging us to eat them. In Asia, the mitten crab is considered a delicacy. The gonads, which ripen during migration, are particularly prized and this could be the key to controlling its expansion. The museum is involved in a project to determine whether the crabs in the River Thames are safe to eat. Current studies aim to check levels of chemical contaminants in the crabs. If they receive a clean bill of health, the crabs could be commercially fished and sold. For now though, we just need to keep an eye out for them. If you do spot one, catch it, kill it and record it here (http://mittencrabs.org.uk/). All they need to know about it is where and when you saw or caught the crab, whether there were other crabs nearby, was it alive or dead, the size of it, and the sex of the crab (male’s have a V-shaped abdomen and a female’s is U-shaped. So just keep an eye out, and if you see it on the shelves (and you eat crab) then buy it and give it a try.