In 2010 the amount of turtles nesting dropped significantly. Since then, the species has still not regained an upward trajectory of recovery, and the reason why remains unclear. 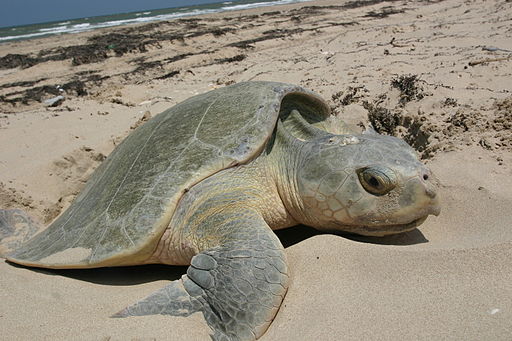 Kemp’s ridley sea turtles are the world’s most endangered turtles, currently classified as critically endangered on the IUCN Red List of Threatened Species. Researchers at the University of Alabama were recently set the task of measuring the species’ level of endangerment for the IUCN, and their findings (published in the journal Ecosphere) reveal that the turtle’s recovery has stalled at less than one-tenth of historic nesting levels.

Kemp’s ridley sea turtles were on the brink of extinction in the 1980s, but a bi-national conservation programme initiated in 1978 by Mexico and the USA was able to reverse their decline. By 2009, the decades of conservation efforts were plain to see, with the turtles exhibiting an exponential recovery rate that was expected to continue for many years. Yet the recovery was stalled – in 2010, the amount of turtles nesting dropped significantly. Since then, the species has still not regained an upward trajectory of recovery, and the reason why remains unclear.

Since there is a lack of data from 1880, when the species was discovered, and 1978 when the conservation programme began, the new study set out the answer the question of how many Kemp’s ridley turtles there should be in the Gulf of Mexico where the species is predominantly found. They did this by examining a piece of film footage from 1947, recorded on the turtles’ primary nesting beach. The historic, black and white film captured a mass-nesting event known as an arribada, involving tens of thousands of nesting turtles in a single day. The film provides a rare benchmark for evaluating the historic population size of a species before it became endangered, something not usually available to conservationists.

This new information adds to the mystery surrounding the stalling of the turtles’ recovery after 2009. “Because the Kemp’s ridley is so protected, scientists believe that potential factors limiting its recovery may be habitat-related,” said doctoral student and co-author Elizabeth Bevan. “Another hypothesis among the field is that environmental pollution, in particular the 2010 Deepwater Horizon oil spill, may have significantly impacted the population, and many years may be required before the species regains an exponential recovery rate.”

Alternatively, the Gulf of Mexico ecosystem may have changed so much over the past 7 decades since the film was taken and cannot now support such a high abundance of turtles. “The Kemp’s ridley could be significantly impacted by long-term changes and the overall health of the Gulf of Mexico ecosystem because of its near exclusivity to the area and presence as a higher-trophic-level predator,” Bevan said. “That’s why it’s so important that we continue our research into the mystery of its stalled growth.”

Co-author Thane Wibbels added: “Solving the mystery will require continued monitoring of turtles on the nesting beach, a better understanding of the ecology of the Kemp’s ridley in its foraging and developmental habitats, and an evaluation of potential changes in the Gulf of Mexico ecosystem since the 1947 film.”