White-nose syndrome is a disease caused by fungus that grows around the wings and muzzle of the bat and kills them by direct contact when they are hibernating. 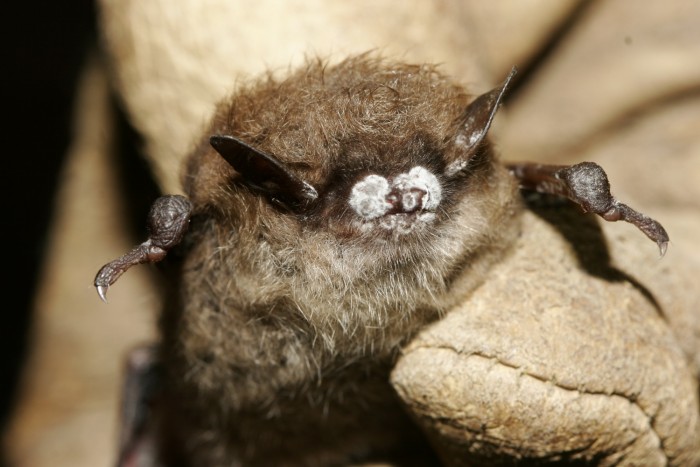 White-nose syndrome is decimating bat populations in North America. The current estimate of the death toll has recently been upped by the U.S. Fish & Wildlife Service to 5.5-6.7 million bats, and biologists expect this devastating disease to continue spreading rapidly.

First documented in a cave in New York State in 2006, white-nose syndrome is a disease caused by fungus that grows around the wings and muzzle of the bat and kills them by direct contact when they are hibernating. It has spread north to Nova Scotia and southwest to Tennessee, and is now present in 16 U.S. states and 4 Canadian provinces. Bats affected by the disease exhibit unusual behaviour during winter, often flying outside during the day and clustering near the entrance of caves and mines where they hibernate.

Producing an exact figure for the total number of deaths is difficult. Once common species, such as the little brown bats, have not been the main focus of seasonal bat population counts, as these concentrate on endangered species like the Indiana bat. Also, the disease has spread so quickly that many bats have succumbed to the disease before pre-disease population estimates were established.

Caves and mines have been closed in an effort to hamper the spread, and the Department of the Interior has allocated $4 million for research and management of the disease. The Government is right to be worried; the 6 species of bats that are affected are all insect eaters that feed on “pest” insects. One study published in the journal Science estimates the value of pest control provided by the bats each year to be at least $3.7 billion.

A few surviving bats were found in Vermont last summer, bringing hope that some individuals are resistant to the disease and could possibly form the nucleus of a recovery effort. The fungus itself has been identified as Geomyces destructans, so research can be focused on this one pathogen and the environment that brings it and the bats together.

However, the New York State Department of Environmental Conservation has described this disease as “the gravest threat to bats ever seen.” Action must be taken quickly to avoid a complete catastrophe for America’s bats.