A New Approach to Habitat Corridors

A new study documents a plan to save endangered carnivores in the increasingly isolated forests of northeastern Argentina. The study explores the options for mitigating the impact of human encroachment using corridors to connect vital habitats. 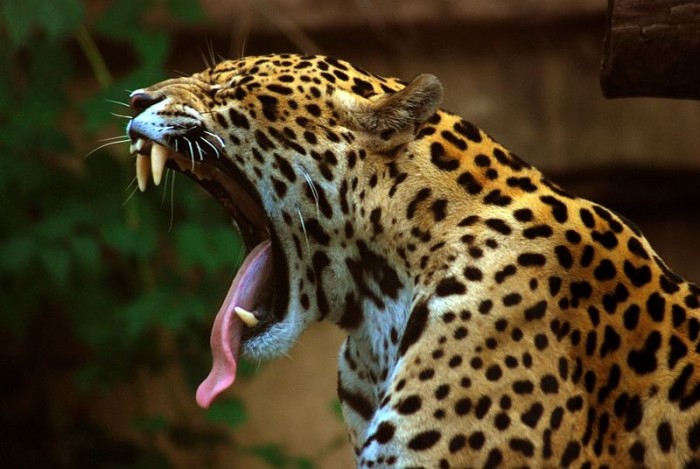 Scat-sniffing research dogs are helping scientists map out a plan to save reclusive and endangered carnivores in the increasingly fragmented forests of northeastern Argentina. This is according to a new study from Washington University in St. Louis, recently published in PLOS ONE.

The study explores the options for mitigating the ever-present impact of human encroachment on five predators. These species are currently clinging to survival in isolated pockets of protected forest that are surrounded by a mosaic of plantations, pastures, roadways and unprotected forest.

“The study details a least-cost plan for the development of a multispecies biological corridor that connects protected areas in the Upper Parana Atlantic Forest Region of Misiones, Argentina,” said co-author Karen DeMatteo, a biology research scientist and lecturer in environmental studies in Arts & Sciences.

DeMatteo, who has spent 10 years working on the project, said completion of the corridor model will allow researchers and community leaders to begin working with property owners to establish the habitat corridors. “This plan is exciting not only for the future of the local biodiversity, but also because it involved a lot of collaboration from the local government and universities to make it happen,” she said.

Recent studies have argued that establishing small, protected reserves for endangered species is not enough to ensure their long-term survival, even in the best of habitats. This is because the animals must move across their range to breed with other scattered populations and maintain genetic diversity. A danger of isolated populations is that, over time, genetic diversity will be reduced and inbreeding will lead to vulnerability to various diseases and genetic defects. Just allowing some migration and exchange of precious genetic materials with other populations can reduce genetic risks and make species more robust in the face of all kinds of threats.

Using dogs trained to detect the scat of specific species, the researchers searched for evidence of the presence of jaguars, pumas, ocelots, oncillas and bush dogs. The research area covered a broad swath of northeastern Argentina, including private and public wildlife reserves, privately owned plantations, farms and pastures, and along roads and pathways leading to scattered communities.

More than 900 samples of scat were collected over several summers. DNA analysis was performed on the samples, which allowed researchers to develop detailed maps of the species frequenting these habitats, including a sense of how their movements were influenced by habitat quality, topography, roadways and other human disturbances.

For species such as the jaguar, which rarely crosses territory disturbed by humans, survival ay depend on the creation of habitat corridors to link isolated population pockets. Because the jaguar is so averse to human interaction, some studies suggest that habitat corridors designed for jaguars would also cover the needs of other predators. However, this study offers a more nuanced approach. It suggests that the optimal footprint for habitat corridors should be drawn with the overlapping needs of many species in mind.

While some species were less intimidated by the presence of humans, each had its own unique requirements in terms of what constitutes a suitable habitat and the length and width of possible corridor connections. “Despite variation in body size, the jaguar, puma, ocelot, oncilla and bush dog overlap in their ecological requirements,” the study said. “However, this is not without variation in the degree of habitat flexibility. Puma, oncilla, and bush dog have comparatively higher levels of modified habitats in their potential distributions compared to the jaguar and ocelot.”

By combining data on all five species, researchers developed a model that provides maximum habitat connectivity for all species, while minimising the cost of establishing these corridors through privately owned lands and communities.

“The findings illustrate the benefit of using multiple species versus a single species to develop corridors, because using only the highly restricted jaguar to develop the corridor would mean that the potential distributions of the other four carnivores would be restricted and decreased by as much as 30 percent,” DeMatteo said. “So, it appears that, at least in the Misiones province, the jaguar should not be modelled as an umbrella species because the results fail to capture the varied requirements of coexisting species across the breadth of potential habitats.”

DeMatteo and colleagues hope the study provides a methodology for identifying the optimal footprint for proposed habitat connection corridors, while incorporating enough flexibility to ensure that the needs and desires of private landholders can be incorporated into the process.

“The approach in making a corridor a reality is multi-pronged and involves a strong investment from the local community, especially when developing corridors that use existing protected areas as ‘stepping stones,’ as private land will inevitably be involved to varying degrees in and around the corridor,” the study concludes.

Habitat corridors are a vital tool in the conservation of endangered species. As animals do not recognise political borders, it often involves the co-operation between the governments of different countries. But man-made wildlife corridors are springing up all across the world. Notable examples include wildlife bridges in Banff National Park, built across the TransCanada Highway. These were established to connect populations that were separated by roads, and to avoid collisions with cars. Over 140,000 animals have been recorded using both overpasses and underpasses. The Netherlands is also leading the way, with over 600 wildlife crossings to enable animals to cross roads. In India, several villages were even re-settled to make way for habitat that will connect populations of elephants. Climate change, however, will add an extra dimension to the connectivity issue. Corridors are being created in the Amazon to enable animals to move upslope as the world’s temperature rises, but clearly this upward movement is limited.

This new research will go a long way to informing decisions about the establishment of corridors to save endangered species, to make them more effective in a world of increasingly disturbed habitats.