Home › Articles & Blogs › A to Z of British Birds, D is for Dunnock

A to Z of British Birds, D is for Dunnock

Their song is a fast-paced, attractive soft warble that livens up a late winter hedgerow. 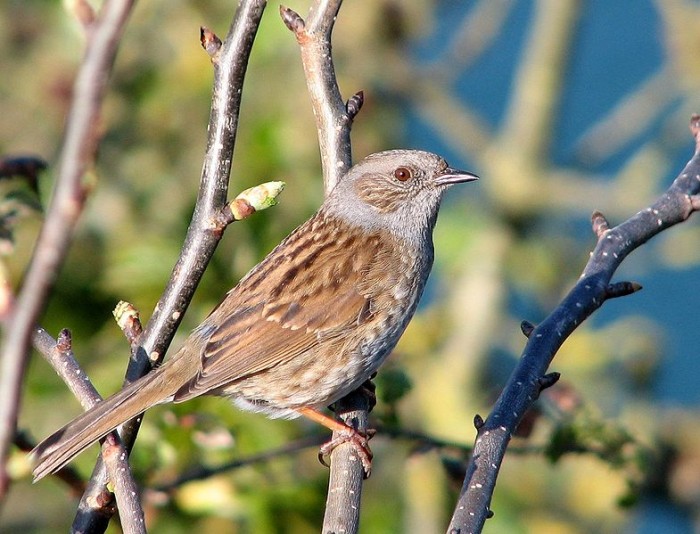 Image: By Smalljim (Own work) [GFDL (http://www.gnu.org/copyleft/fdl.html) or CC-BY-3.0 (http://creativecommons.org/licenses/by/3.0)], via Wikimedia Commons

D is for dull. Plain. Unremarkable. Yes, some of the birds beginning with D – and I confess there are not so many of them in Britain – are on the subtle side. But to dismiss a dunnock, for example, as a little brown job would be to miss out on some bird-derived pleasure, not to mention a fascinating life history tale. Their song is a fast-paced, attractive soft warble that livens up a late winter hedgerow. Reading up on the dunnock’s surprisingly deviant sex life adds spice to the sound: females often mate with multiple males, which compete to eject each other’s sperm from the female’s cloaca. A single brood can be the offspring of multiple fathers. A surprising story when uncovered; polyandry has been discovered in a number of other bird species, especially passerines – faithful ‘love-birds’ are perhaps rarer than traditionally thought.  And it’s studying common, easy to find species like the dunnock that offers such fascinating insights into the private lives of birds.

Meanwhile, down on the marshes and shorelines, thousands of dunlins pick their way through the mud. It’s a small, brown-greyish wader – though more striking in breeding plumage way up north, or in the autumn on passage, when it’s streaked with remnants of black on the belly. Still, there are plenty of waders that offer more in the way of visual attraction, and very many that are rarer. So why bother looking at one?

Well, dunlin being the archetypal bird of a type – waders – that are pretty hard to separate from one another, knowing dunlins like the back of your hand will help you to recognise when something is not a dunlin. In the autumn especially, flocks of dunlins may be accompanied by closely related little stints or curlew sandpipers, splendidly marked birds which would otherwise be hard to pick out from a mass of mobile, lookalike waders. Attention paid to the commonplace often opens the door to something a little bit special.

In fairness to the letter D, dunlin and dunnock are about the only mostly brown-ish birds on offer. Step forward ‘little purple job’ the Dartford warbler, or the most attractively plumaged dotterel, which breeds atop Scottish mountains and can be seen in small numbers on its way north in the spring. Still, remember the rule of the dunnock and the dunlin: there are rewards on offer for spending quality time with almost any bird, no matter how unpromising it may look.