The dwarf crab is native to the east coast of the Americas where it has the distribution from New Brunswick, Canada to north-east Brazil. There is also a breeding fresh water population in the Brazos River basin, Texas. 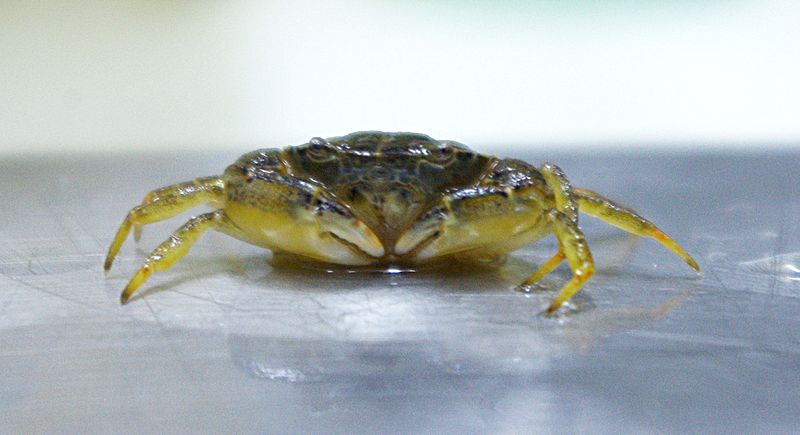 This week, R is for Rhithropanopeus harrisii otherwise known as the Zuiderzee Crab, Dwarf Crab, Harris Mud Crab or the White-Tipped Mud Crab. R. harrisii is an omnivorous crab that can be found in brackish water, estuarine conditions and (as implied by its common names) on mud. R. harisii was first imported into the UK via the Roath Docks, Cardiff, South Wales less than 20 years ago, in 1996, although it is not known exactly where from. The Cardiff Docks are the only place where the JNCC (Joint Nature Conservation Committee) have observed this species. The JNCC also entertains the possibility that the species will spread through Britain via the ballast water in ships or clinging to the ship hulls.

The dwarf crab is native to the east coast of the Americas where it has the distribution from New Brunswick, Canada to north-east Brazil. There is also a breeding fresh water population in the Brazos River basin, Texas. It is also not know how the species came to Europe, but it was first observed in the Zuiderzee in The Netherlands. R. harisii spread through Europe between the 1870s and 1950s and has established itself in Denmark, Belgium, Poland, West Germany and France, and in Russia, Romania and Bulgaria – from the Black and Caspian Seas and also in the Sea of Azov. As stated previously, it has only very recently arrived in Britain. Its spread in Britain is unknown, and so far it has not been found outside Cardiff Docks. Its spread is probably associated with shipping. The reason for its success in Europe is unknown, however the Cardiff Docks have a very low salinity (about 12‰) and it has been found in lakes and estuaries at a salinity of only 4‰. This means they have a high tolerance to a wide range of salinities in estuaries and lakes.

This is a species which should be checked and the spread monitored due to its likelihood of spreading throughout Britain. It is a species to keep an eye out for as the earlier it has been found in a new location, the increased chance of stopping it from spreading further. R. harisii can reach the shell size of 20 millimetres (around 0.8 inches). It is olive, green or brown in colour and sometimes has dark spots on its carapace (shell).

There is no official study showing the impacts of R. harrisii on local waters, although anecdotal evidence in other countries have shown that they may alter food webs, compete with native crabs (possibly lowering populations) or even displacing them completely. In the Caspian Sea, where the crab has reached high densities, R. harrisii is responsible for fouling water intake pipes and causes economic loss to fishermen by spoiling fishes. In Texas, the crab has become very abundant in almost all freshwater reservoirs and is reported to foul PVC intakes in lakeside homes and clogged the cooling system of a nuclear power plant in Glenrose. On top of all this, a study by Payen and Bonami, 1979, identified R. harrisii as a carrier of the white spot baculovirus, which causes diseases in prawn species and other species of crab.

All in all, this species is not known to be troublesome in UK, however the population is very localised to the Cardiff Docks and it has the potential to spread and do a considerable amount of damage. If you do spot this species in a different location than Cardiff; send an image, as well as detail such as sex, size, time and place of sighting to the JNCC.