Are Deer a Factor in Woodland Bird Declines?

Deer are a popular topic of conversation in the UK at present with many sources claiming that recent population increases are having a detrimental effect on our woodland ecosystems. 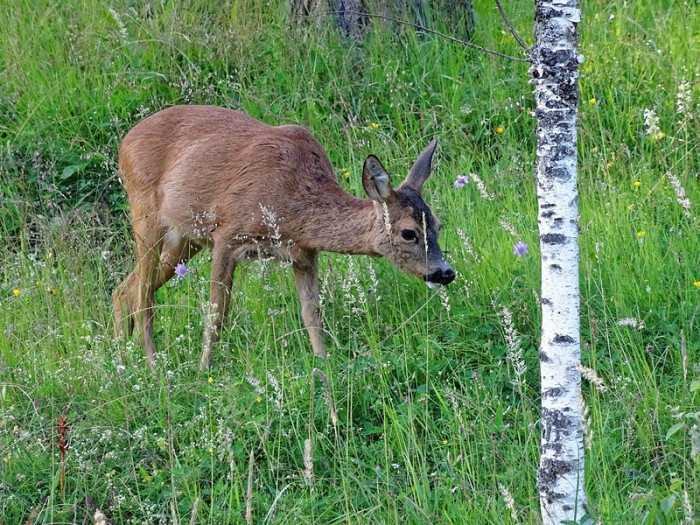 Deer are a popular topic of conversation in the UK at present with many sources claiming that recent population increases are having a detrimental effect on our woodland ecosystems. This has resulted in many, including both conservation and recreational bodies to call for control measures as a means of mitigating the potential problems caused by deer. While I will largely bypass the issue of deer management here, one particular facet of the debate in particular has caught my attention – the notion that deer could be having a profound negative impact on woodland bird species in the UK. An issue subject to much research, some of which I will attempt to summarise below, and one that stems entirely from the ability of deer to greatly alter the habitat in which they persist.

The impact of deer upon floral diversity.

Through selective browsing, deer can have a profound effect on vegetation structure in woodland ecosystems (Gill, 2000) and the main way in which they could potential impact upon woodland bird species is through alternation of the woodland understory (Fuller, 2001). In lowland, wooded areas, understory species such as Bramble, Honeysuckle and Ivy have been shown to comprise an important part of deer diet (Forde, 1989), particularly when less alternate food is available; while tree saplings and wildflowers are also susceptible to overgrazing (Gill, 2000). Deer grazing, as such, can limit the density and abundance of woodland flora (Gill & Fuller, 2007), a statement supported by many studies excluding deer from woodland areas. Through selectively removing palatable species, deer also encourage the growth less appertising flora including Bracken and various grasses (Kirby, 2001; Gill, 2000), both of which have the potential to outcompete and “shade out” other plant species. Additionally; deer may also impact vegetation structure via trampling – something that often kills seedlings and has the potential to maintain areas of, low-diversity, bareground (Hobbs, 2006).

Before proceeding, I should stress that the above factors would rarely cause issue within a healthy ecosystem. In the UK however, where humans have extirpated most large predators, deer can reach very high localised densities. As such, natural processes such as grazing often find themselves amplified and excessive deer populations can indeed greatly alter woodland structure – something that can have profound effects on other species within the same habitat, including woodland birds.

Are deer having an impact upon woodland birds?

Many woodland bird species of conservation concern are dependent, either for feeding or breeding, upon vegetation growing within two meters of the ground. Among these; species such as Song Thrush, Nightingale, Willow Tit, Bullfinch and Marsh Tit, all of which have been subject to recent declines (Gill & Fuller, 2007). As such, it stands to reason that habitat alteration on behalf of deer may be playing a part in their respective declines, though other factors will inevitably feature alongside this.

The first way in which deer could potentially impact upon woodland birds is through direct removal of avian food sources. Indeed, a number of studies have shown that invertebrate numbers can be limited by the effects of browsing (Gill & Fuller, 2007), invertebrates that provide an important resource for insectivorous species year round and for the chicks of many other birds. The impacts of overgrazing appear to be most profound for phytophagous invertebrates, species that feed directly on the plants themselves (Baines et al, 1994) though the abundance of flies (Putman et al, 1989), web-building spiders (Miyashita et al, 2004) and beetles (Gomez et al, 2004) have also been shown to be affected. In addition to the removal of invertebrate prey, excessive grazing also has the potential to limit the flowering of woodland plant species thus limiting the amount of fruit produced. Something that denies these items as a food source for many birds (Allison, 1990) and may lead to decreases in the invertebrate species that depend on them (Gill & Fuller, 2007), among these, pollinators.

Overgrazing can also lead directly to a loss of breeding habitat for many bird species (Gill & Fuller, 2007). A number of studies have found a direct link between deer browsing and breeding bird density, including that of DeCalesta (1994) whom, studying four areas with differing deer densities concluded that the number of birds exploiting the ‘intermediate canopy’ was directly related to deer abundance. The findings of McShea and Rappole (2000) also support this theory. Circumstantial evidence from the UK also exists showcasing a negative relationship between deer and woodland birds, notably a study by Perrins & Overall (2001) whom noted a distinct change in the avian community of Wytham Woods, Oxfordshire coinciding with a rapid increase in the local deer population. The biggest decrease being observed in insectivorous warblers.

The findings of the researchers cited above, coupled with further data set out by Gill and Fuller (2007) in their review; “The effects of deer browsing on woodland structure and songbirds in lowland Britain” supports the theory that deer are capable of greatly impacting upon woodland bird species within the UK. There is however a distinct lack of relevant studies from within the UK and future research is undoubtedly required to properly assess the relationship between deer and woodland birds. Aside from the large scale culls favoured by some, other methods of mitigating the effects of deer on birds have been suggested. Among these; thinning of the canopy in order to encourage new growth appears popular and some studies, notably those of DeGraaf et al (1991) and Bell & Whitmore (1997) have shown this may work. There are however suggestions that thinning and thus the encouragement of new growth could simply encourage more deer into those areas – simply beginning the process a new and not providing a permanent solution.

Personally, I feel there is a pressing need to combat this issue before further declines in woodland bird species are observed. There appears to be ample evidence to suggest a link between “overpopulated” deer and declining woodland birds and I would support any means deployed to counteract this, including culling. Fencing remains an option though in my opinion this simply shifts the problem elsewhere and does little to combat the issue on a national level – deer fencing also posing problems for some of our larger woodland bird species. I would welcome new research into the topic; specifically to bring the issue to light once and for all but also to highlight where the problem is at its worst. Hopefully, in the near future, such research will be undertaken and the necessary measures taken to safeguard species such as Nightingale and Willow Tit from further declines. Of course, practices must be put into place to combat the other issues attributing to woodland bird declines – the loss deadwood, invasive species etc. I do however feel, after reading the available literature that deer management must surely play its part.