Illegal logging is having serious impacts – not just on the forests themselves – but on the animals. It’s reasonable to assume that if the birds are being this powerfully impacted, it’s impacting other groups, such as mammals, reptiles, amphibians and arthropods. 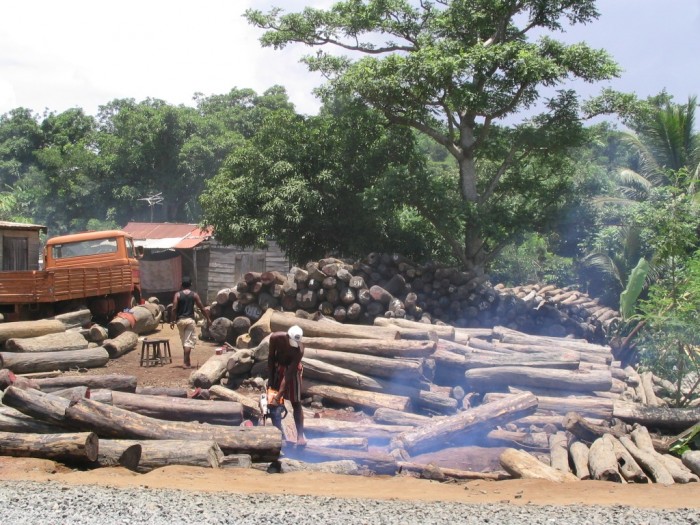 Tropical forests are home to more of the world’s terrestrial biodiversity than any other habitat. However, they are adversely affected by man’s activities. One such activity is illegal logging, which is an increasing threat to tropical forests around the world, as well as the animals that live there.

The impact of illegal logging on tropical wildlife has not been quantified, until now. A study published in Biological Conservation has revealed the impact of illegal logging on bird communities in Ghana. Researchers from Drexel University in Philadelphia sampled bird communities in logged and unlogged forests from 2008 to 2010 in Ghana’s Upper Guinea rainforests, one of the world’s 25 “biodiversity hotspots.” They compared this data with data from findings taken from fieldwork in the same study area between 1993 and 1995, when illegal logging was not as prevalent.

They discovered that the level of illegal logging increased by more than 600% between 1995 and 2010. This is six times greater than the maximum sustainable rate. During the same time period, the abundance of forest understory bird species declined more than 50%. The species richness – the number of different bird species – also showed decreasing trends. Species such as the yellow-whiskered greenbul declined by 73% and the icterine greenbul declined by 90%. To make this worse, bird communities showed no evidence of post-logging recovery.

“The numbers don’t lie and they don’t have a political agenda. These numbers are shocking,” said lead author Nicole Arcilla, PhD, postdoctoral research associate in the Biodiversity, Earth & Environmental Sciences (BEES) Department in Drexel’s College of Arts and Sciences. “Our most disturbing finding was that more than half of all understory birds had vanished in only 15 years. If things continue as they are, in a few decades, these incredibly beautiful forests and their unique wildlife will be largely depleted, which would be a huge loss to Ghana, Africa and the world.”

According to the study, illegal logging accounts for 50-90% of timber harvested in many tropical countries. In Ghana, an estimated 80% of timber harvested is illegal. The results indicate that Ghana’s forestry management system has seriously deteriorated due to an increase in logging intensity as well as illegal logging. The data from 2008 to 2010 showed an absence of many conservation priority species, demonstrating continuing population declines and increasing rarity of species that are already threatened with extinction. But even common species are at risk.

“Logging and associated disturbances that have been taking place in Ghana’s forests appear to have affected the entire bird community – including both common and rare or specialised species – causing abundance declines across species,” said Arcilla. “Species that were already rare are then most vulnerable to local extinction following logging, and many ‘common’ species have become much less common.”

The severe declines of bird species indicate the rapidly deteriorating conservation status of a biodiversity hotspot, and could signal collapsing ecosystem processes. Arcilla says: “Illegal logging is having serious impacts – not just on the forests themselves – but on the animals. It’s reasonable to assume that if the birds are being this powerfully impacted, it’s impacting other groups, such as mammals, reptiles, amphibians and arthropods. Birds – like the ‘canary in a coal mine’ – are a great indicator of what’s happening to other animals, and eventually, what will happen to us.”