New research indicates that large numbers of these birds in the Galapagos has fallen in the past 20 years, because they have stopped breeding.

By Alex Taylor on 5th June 2014 in Bird Conservation 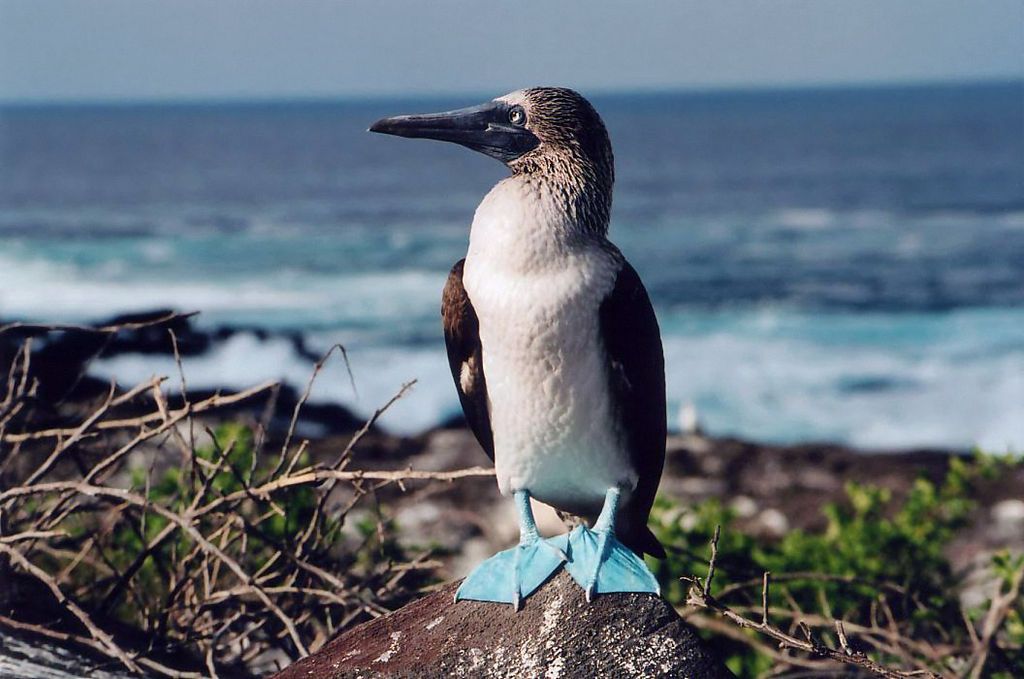 Image: By Rileypie at en.wikipedia [Public domain], via Wikimedia Commons

The charismatic Blue-footed Booby is an iconic species in the Galapagos Islands, and a huge draw for tourists with their bright blue feet and their famous mating dance. It is not listed as an endangered species due to a wide range from the USA to South America. Both BirdLife International and the IUCN Red List classify them as of “least concern.” Yet new research indicates that large numbers of these birds in the Galapagos has fallen in the past 20 years, because they have stopped breeding.

A study published recently in the journal Avian Conservation and Ecology documented a decline of more than 50% over the past two decades. In 1997, scientists first started noticing a strange trend at the 10 Blue-footed Booby breeding colonies located in the Galapagos Islands. They discovered that the colonies were empty. Professor David Anderson, from Wake Forest University in North Carolina, says: “Until 1997, there were literally thousands of boobies at these breeding sites and hundreds of nests full of hatching chicks. Then suddenly, the boobies just weren’t there. There were a few cases where we found isolated breeding attempts but most of these didn’t produce chicks.”

At first the decline was thought to be simply an isolated occurrence, put down to a few bad years due to varying environmental conditions. Three years of no breeding activity, however, caused more worry. In 2011, funding from the Galapagos Conservancy, Swiss Friends of Galapagos and the Galapagos Conservation Trust enabled scientists to comprehensively survey Blue-footed Boobies in the Galapagos. From May 2011 to June 2013, a field team monitored breeding at three to five month intervals at four of the largest breeding colonies. The team found little to no breeding activity, with only a total of 134 fledgling birds during the study period in areas where there were once hundreds if not thousands of nests.

“It was alarming. This was a drastic change from the 1980s and 1990s, when young Blue-foots were common throughout the archipelago,” noted Professor Anderson. The research team estimated that the total population was 6,423 birds in 2012 – less than a third of the only other estimate from the 1960s.

Although not conclusively proved, the scientists now link the decline to a similar drop in populations of sardines in the area. Previous studies of Blue-footed Booby colonies on the island of Espanola show that successful breeding occurs only when sardines make up almost 100% of their diet. During the recent study period, sardines represented less than half of the birds’ diet, indicating that this low sardine diet is enough to allow them to live, but is insufficient for successful breeding. The majority of Blue-footed Boobies will now be nearing old age as they only live 15 to 20 years, so raising offspring will almost impossible.

Whether the scarcity of sardines is natural or caused by humans, due to overfishing or climate change for example, no one knows for sure. But the lack of sardines could affect other species in the area, including two other species of boobies – the Red-footed Booby and the Nazca Booby. The decline of all three species could impact the economy of the Galapagos Islands, as they are so popular with tourists, and the impact on the entire food web remains to be seen. Further research is essential to find out why they are not breeding and what can be done to save them. As Professor Anderson points out: “If humans are in fact contributing to this decline we need to get to the bottom of it now rather than five years down the road when you have the equivalent of 75-year old humans trying to breed.”