Following the publication of Cat Wars, a new book by American author Peter P. Marra, our feline friends have found themselves at the epicentre of a heated debate regarding their supposed ecological impact.

By James Common on 22nd September 2016 in Bird Conservation, Environment 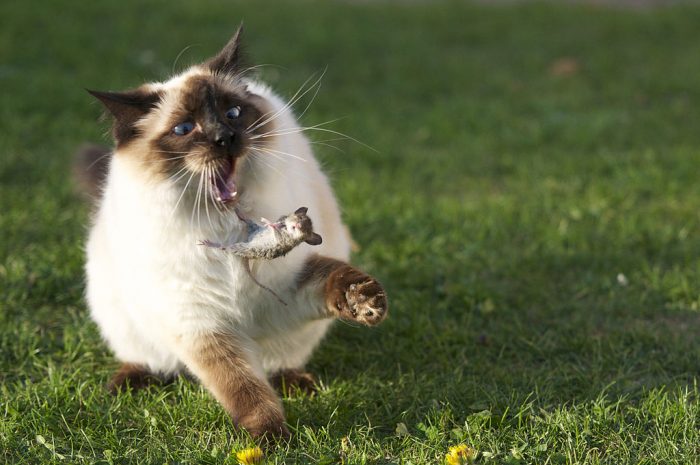 Cats have featured heavily in the media this week, though not for the usual reasons. Indeed, following the publication of Cat Wars, a new book by American author Peter P. Marra, our feline friends have found themselves at the epicentre of a heated debate regarding their supposed ecological impact. With British conservationists downplaying the authors comments that “all free-ranging cats should be removed from the landscape by any means necessary” due to their impact on native fauna.

In his book, Marra highlights the negative impact of free-ranging cats the world over, from New Zealand and Australia – where they are responsible for the near extinction of a number of endemic species – to his native America, and has since gone on to criticise the inactivity of British conservation bodies when it comes facing the problem in our own back yard. Echoing the earlier views of popular naturalist Chris Packham in calling for cats to be kept indoors, neutered or, in some cases, euthanised.

These views appear directly at odds with the popular line that despite being fairly numerous (7.4 million), and killing upwards of 55 million birds a year, that cats are a relatively harmless figment of the British landscape. With both the RSPB and John Bradshaw, director of the anthrozoology institute at the University of Bristol, claiming that cats are not a problem. Instead championing habitat loss as the main cause of bird decline in the UK.

As a cat owner, a cat-lover and also a naturalist, this is a debate which greatly interests me. And has done for a long time. Despite my cats being relatively housebound, and kitted out with enough bells to rival Santa’s sleigh, I have been unlucky enough to witness the effect of cats first hand on many occasions. Not often from my own, mercifully, yet only last week I pulled a moribund juvenile Greenfinch (a declining species in the UK) from my neighbours cat, and this summer witnessed a cat toying with the corpse of a Tree Sparrow – a ‘red list’ species of conservation concern. Such things have caused me to give considerable thought to the issue at hand.

In terms of the very public bickering going on between both sides, I actually find myself agreeing with both. I agree that cats are a terribly destructive force around the globe and, despite my fondness for them, find myself agreeing with control measures implemented by countries such as Australia, aiming to protect native wildlife from what is, above all else, an alien predator. I also agree with the RSPB that habitat loss is the number one cause of bird declines in the UK, that cannot be disputed. I am, however, a little dubious of their decision to dismiss the issue outright. Fifty-five million birds is, after all, a somewhat staggering number.

The RSPB are quick to point out that cats tend to prey on sick or injured birds. This may well be true, on occasion, but what about their tendency to raid the nests? Juvenile birds are neither sick nor injured, merely defenceless. Remember the nest of Wood Warblers on Springwatch a few years ago? Such behaviour is likely hugely under-recorded but who is to say it is not a problem? While most predators show a preference for easier targets, one must remember that cats, despite their appeal, are a superbly adapted killer, and like any other predator, have the potential to prey on healthy animals when the need be. Particularly in gardens where food is placed out absent consideration, as is often the case.

The other commonly voiced opinion with regards to cat predation is that they tend to predate, majoritively, common and widespread species. A statement recently echoed by Dr Mark Avery, who later went on to state that “cat control is far from a top level priority” insisting that we should work to combat issues such as climate change and raptor persecution first. Well, I agree with Mark on the second point, but as for the first, I remain sceptical, to say the least at least. The Springwatch Wood Warblers very publically showed that cats do indeed predate rare birds. Something brought home by my own encounter with the Tree Sparrow. Of course, it makes sense to believe that cats would consume common species – these are, after all, those most likely to be encountered within the ecosystem, though it is clear that this is not always the case. An important thing to remember given the depleted, often fragmented state of some rare bird populations. Could cats tip them over the edge? I suspect so.

The RSPB state on their website that the species suffering most from cat predation are likely (and in order): House Sparrows, Blue Tits, Blackbirds and Starlings. These species are indeed some of our most plentiful birds, but three of them are currently suffering declines in the UK. And in the case of the House Sparrow (red listed) and Starling (red listed) declining catastrophically. With House Sparrows, in particular, shown to be particularly prone to cat predation (Churcher & Lawton, 1987).

Of all of our birds, it is our embattled sparrows I fear for the most in regards to cats, with and a number of studies hinting at the potential role of cats in their decline. Indeed, Baker et al (2005) suggest the need for future research due to their own observations, and Crick et al (2002) highlight the fact “that cats (both domestic and feral) accounted for 26 million dead House Sparrows in Britain during 1997, of a total population of 49 million”. Does it not then stand to reason that cats could, at least in part, be blamed for the decline of this once common bird? I suspect it does, especially given the often shared habitat of both. Obviously, many other factors pose a threat to House Sparrows – food supply, harsh winters, window strike, take your pick – but the deaths of 26 million that may otherwise have lived to “chirp” another day surely gives cause for concern? There is, however, a distinct lack of scientific evidence for those wishing to answer this question definitively.

I, personally, would like to see this issue given much greater consideration, particularly from the scientific community. It may only be an opinion, but with fifty-five million birds a year falling victim to cats (not counting for those undiscovered), it does raise alarm bells. As Mark Avery says, many factors have contributed to the declines of British birds and these are often of more pressing concern. It does, however, seem rather preposterous not to consider the impact of cats, especially given the woeful declines of some of their favoured prey species. And, of course, the trends observed elsewhere in the world. Yes, House Sparrows and their like are not endemic, nor on the verge of extinction, yet. But surely alleviating one source of pressure would be a good thing? It would not be easy, but it could be done.

As for the reluctance of conservation bodies to even broach the issue of cat predation, in my opinion, this relates directly to one thing. Membership. Many paying members of conservation bodies such as the RSPB likely own cats, a great many no doubt. These people directly fund the amazing work done by such organisations and would be peeved, let’s say, should said bodies demand their beloved tiddles be confined to the house. Many would likely pull their support for that organisation as a result of this, removing a substantial amount of income in the process. Just a thought, but if this is true, which to an extent I suspect it is, it is both understandable, yet entirely shameful at the same time.

I, personally, find myself agreeing most with Chris Packham on the matter. Cats should be kept indoors, much as my own are, and owners should be liable for the damage done by their marauding moggies when they are not. I would need to see a lot more evidence before I condoned lethal control of cats, but would like to see efforts to educate owners ramped up by those who claim custodianship of our environment.

The decline of the House Sparrow: a review J. Denis Summers-Smith 2003