The Bramble Cay melomys will go down in history, as it is the first mammal to become extinct due to human-induced climate change. 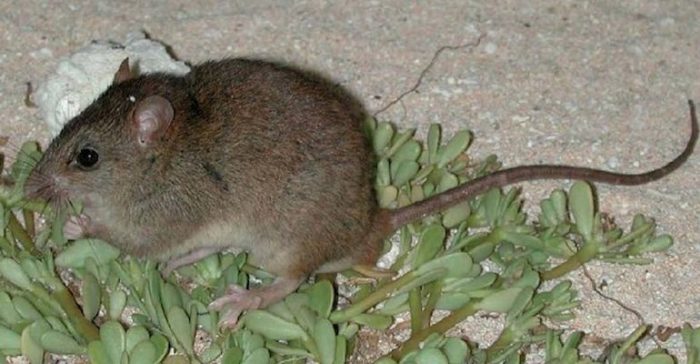 The Bramble Cay melomys, also known as the Bramble Cay Mosaic-tailed rat, is a small rodent found only on one tiny island in the Torres Strait, between Australia and New Guinea. Although unknown to most people, this species (the only mammal endemic to the Great Barrier Reef) will go down in history, as it is the first mammal to become extinct due to human-induced climate change.

Scientists at the University of Queensland and the Threatened Species Unit at Queensland’s Department of Environment and Heritage Protection published their findings last week. Their report documents a comprehensive survey that took place between August and September in 2014, to determine whether or not the Bramble Cay melomys still existed after an earlier limited survey found no trace of the animal. The survey was unsuccessful at finding any of the rodents, and anecdotal evidence from a fisherman who has visited Bramble Cay every year for the past ten years suggests that the last known sighting may have been back in 2009.

“A thorough survey effort involving 900 small mammal trap-nights, 60 camera trap-nights and two hours of active daytime searches produced no records of the species, confirming that the only known population of this rodent is now extinct,” the report states. “Because exhaustive efforts have failed to record the Bramble Cay melomys at its only known location and extensive surveys have not found it on any other Torres Strait or Great Barrier Reef island, the assertion that Australia has lost another mammal species can be made with considerable confidence.” It also says: “Significantly, this probably represents the first recorded mammalian extinction due to anthropogenic climate change.”

The Torres Strait region has experienced extremely high water levels and damaging storm surges. The scientists concluded the “root cause” of the extinction was sea-level rise. Sea levels have risen throughout the world, but around the Torres Strait sea level appears to have risen at almost twice the global average rate between 1993 and 2014.

As a result of rising seas, the island (which sits at only 3 metres above sea level) was inundated on multiple occasions, killing the animals and also destroying their habitat. It was estimated the area of the cay above high tide has decreased from 4 hectares in 1998 to 2.5 hectares in 2014. The melomys lost 97% of their habitat in just 10 years, with vegetation cover declining from 2.2 hectares in 2004 to just 0.065 hectares in 2014. The scientists noted: “For low-lying islands like Bramble Cay, the destructive effects of extreme water levels resulting from severe meteorological events are compounded by the impacts from anthropogenic climate change-driven sea-level rise.”

Now that the report recommends that the status of the Bramble Cay melomys be changed from endangered to extinct, the Queensland government’s website declares that “no recovery actions for this population can now be implemented.” It is too late.