As their calls continue to change, it is vital that the females’ inner ear adapts to the altered chirps of the male – if they do not adjust their hearing, the species could become extinct.

By Alex Taylor on 8th May 2014 in Climate Change, World Conservation Issues 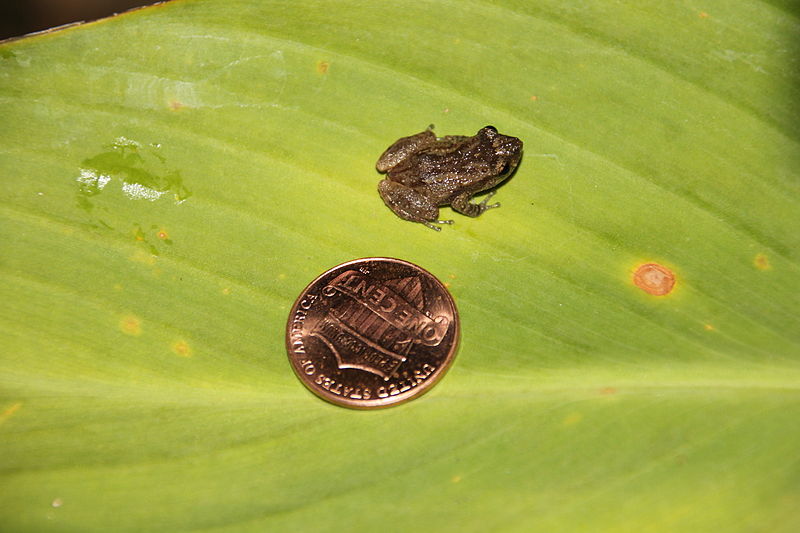 Image: By Cathybwl (Own work) [CC-BY-SA-3.0 (http://creativecommons.org/licenses/by-sa/3.0)], via Wikimedia Commons

There are more than 6,300 species of frogs and toads in the world, 30% of which are endangered. Reasons for this includes destruction of habitat, chemical contamination of water supplies, exposure to deadly fungi and, of course, climate change. For one particular species, the coqui frog, rising temperatures are having an unusual impact.

The coqui frog is native to Puerto Rico, where it is the national animal and features in songs and children’s stories. Now, the frog is the subject of a study by biologists from the University of California, Los Angeles which is the first to show the effect of temperature change on a species of tropical frog over a time scale of several decades.

The study, published last month in Proceedings of the Royal Society B, found that male coqui frogs have become smaller in size and their mating call has changed. The biologists examined 170 male frogs from 1983, and 116 males in 2006. The frogs came from differing altitudes, ranging from 10 to over 1,100 yards above sea level. Frogs at comparable altitudes are now more than 10% smaller in length than they were 23 years previously. Data from weather stations showed that over the same time period, temperatures increased by almost 0.5 degrees Fahrenheit, a large rise in such a short space of time.

The coqui frog is so named because their calls include a “co” note (which is a warning to other males) and a “qui” sound (used to attract females). The biologists discovered that these calls are becoming shorter and higher pitched. One of the authors of the study said: “We think that the animal adapted to temperature change by becoming smaller which we believe causes the difference in their calls.” The change to their calls is not large, but is significant enough to make the years ahead difficult for the frogs, as their reproductive success is likely to decrease substantially. Another author states: “If current trends continue unabated, the coqui frog will sound and look quite different before this century is over.”

As their calls continue to change, it is vital that the females’ inner ear adapts to the altered chirps of the male – if they do not adjust their hearing, the species could become extinct. This would also have adverse effects on Puerto Rico’s food chain, because the frogs are preyed upon by many animals, including land crabs, owls and snakes. Their survival is also important for human inhabitants. Without the frogs to eat mosquitos, people will be much more exposed to these insects and the diseases they carry, such as dengue fever and malaria.

These small frogs are experiencing small changes, but the impact of their loss could be huge.