Large deer populations are forever altering natural forests by disrupting the soil’s seed banks. Deer are not only slowing down forest succession, in some cases they are preventing forests from establishing in the first place. 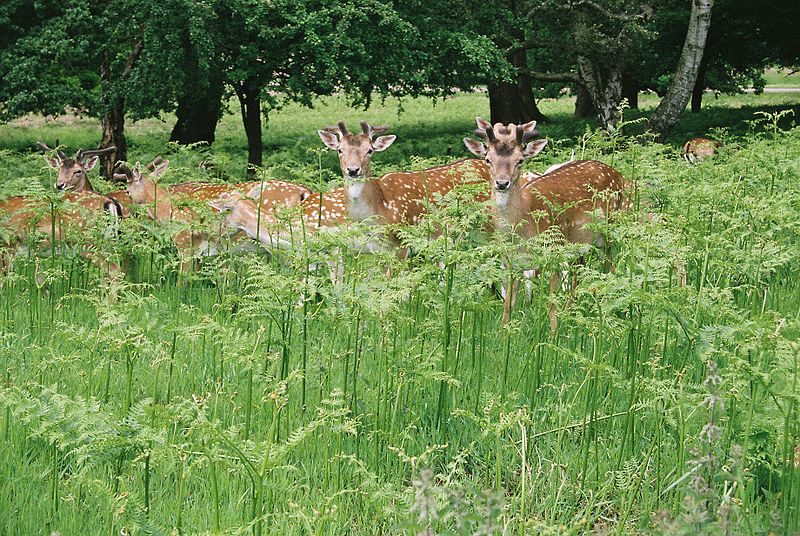 Image: By Freedom to share (Own work) [GFDL (http://www.gnu.org/copyleft/fdl.html) or CC-BY-SA-3.0 (http://creativecommons.org/licenses/by-sa/3.0/)], via Wikimedia Commons

As humans have decimated huge populations of carnivores, deer have taken advantage, increasing their numbers rapidly. In the USA, deer now number 30 million, resulting in widespread property damage, crop losses, increasing incidence of Lyme disease and often fatal car-deer collisions. Every year, a single deer consumes around 3,000 pounds of vegetation, so it is no surprise that they can alter ecosystems.

As deer are “preferential browsers” they not only reduce the total density of plants in the understory, they also alter species composition and diversity. And it is not just plants that are affected. Studies have shown that high deer numbers lead to fewer songbirds and less songbird diversity as the deer eliminate habitat the birds need to eat, nest and sleep. Native wildflowers may also disappear when there are too many deer, taking nectar sources and insects with them.

It is the damage to plants that is most obvious, but one study recently published in PLoS ONE has discovered that what we see above ground is only half of the story. Researchers from Cornell University found that large deer populations are forever altering natural forests by disrupting the soil’s seed banks. Deer are not only slowing down forest succession, in some cases they are preventing forests from establishing in the first place.

The way that forests naturally mature is by grasses giving way to herbs and shrubs, and then woody plants and trees take root. In north-east USA, where the study took place, trees such as cottonwood, locust and sumac thrive. When deer are present, however, forest development is stalled because deer are preventing the growth of woody plants and instead thorny thickets of buckthorn, riburnum and multiflora rose bushes are present. Deer typically prefer to eat native, woody plants and ignore invasive species. This means that native plants disappear and the non-native species are able to flourish.

The study showed that deer grazing resulted in bare soil and reduced plant biomass. The deer’s impact on the seed banks within the soil caused decreased overall species richness and relatively more short-lived species of annual and biennial plants. One of the study’s authors, an associate professor of weed ecology and management, helped to gather soil samples from within and outside of fenced “deer exclosures.” He found that soil from outside the exclosures contained many more seeds from non-native species than in the soil from within areas where deer were not able to feed.

The USA now has 100 times more deer than it did a century ago. The UK also has too many deer and the impact is clear to see. But the impact we can see is clearly just the tip of the iceberg. A case for the return of our long lost predators?