Scientists have reported the first cases of foot disease in huemul deer in Chile. The deer are dying from the disease, and this could pose a serious threat to a species that is already the most endangered deer in South America.

By Alex Taylor on 12th May 2019 in Animal Conservation, Research, World Conservation Issues 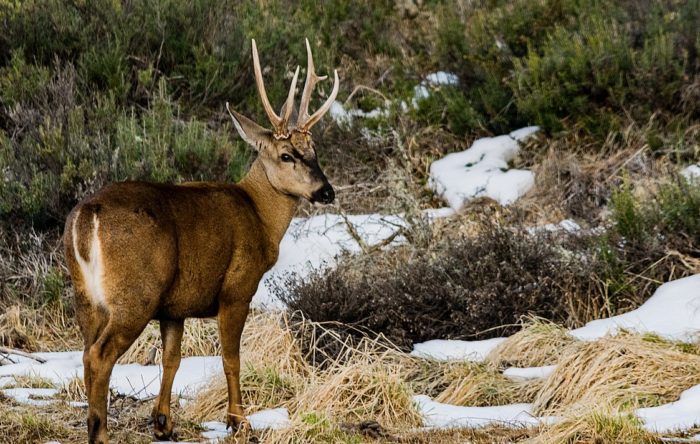 Scientists have reported the first cases of foot disease in endangered huemul deer in Chilean Patagonia. The study, published in PLOS ONE, was led by scientists from Chile and the USA. They found foot lesions in 24 huemul deer in Chile’s Bernardo O’Higgins National Park between 2005 and 2010. The park remains one of the few strongholds for the species, which lives in the rugged mountainous terrain of southern Argentina and Chile.

The foot disease causes severe pain, swelling, partial or complete loss of the hoof and in many cases, death. Affected animals become unable to move and forage, leaving them susceptible to starvation and predation. Researchers identified parapoxvirus as the likely cause of the disease. About 40% of the 24 affected deer died, suggesting the virus could pose a considerable conservation threat to the already vulnerable species.

Marcela Uhart, a wildlife veterinarian from the University of California Davis, says: “We knew that deer were getting sick and dying from this disease for many years, but we didn’t know what was causing it. We’re really excited that we found a potential cause for this disease. Now we need to learn from it so we can be better prepared to help this species.”Culturally iconic the huemul deer appears alongside the condor on Chile’s coat of arms and symbolises biodiversity in the region. Huemul deer were once widespread in Patagonian forests, but now only about 2,500 remain in the wild. In the 19th Century, habitat loss, poaching and livestock disease began contributing to their decline – today, the huemul deer is the most endangered deer in South America.

“Considering the critical situation of huemul deer, this finding is a significant first step toward identifying and implementing solutions. We will continue to work closely with all relevant stakeholders for the recovery of this flagship species,” said lead author Alejandro Vila, the Scientific Director of the Wildlife Conservation Society in Chile.

The lab analysis provided some indication that this disease may have originated with livestock (parapoxvirus DNA present in the sample was highly associated with bovine viruses) but more research is needed to confirm this.

The study states that a better system for monitoring the population, collecting high-quality samples and ensuring their delivery for lab analysis could help researchers, land managers and wildlife veterinarians more quickly identify problems huemul deer face and find ways to help them.

“It’s very rare to link an endangered species with the cause of a disease,” Uhart said. “Disease is one reason this species is not doing well. A collaborative framework that involves the different stakeholders can help us put the right pieces in place to diagnose and help the species.”