Home › Articles & Blogs › Good News for Orangutans…Or Is It?

Good News for Orangutans…Or Is It?

In the last 25 years, Sumatra has lost almost half of its forests, and has one of the highest rates of deforestation in the world. The orangutan’s forest home is being felled and turned into oil palm plantations on a massive scale. 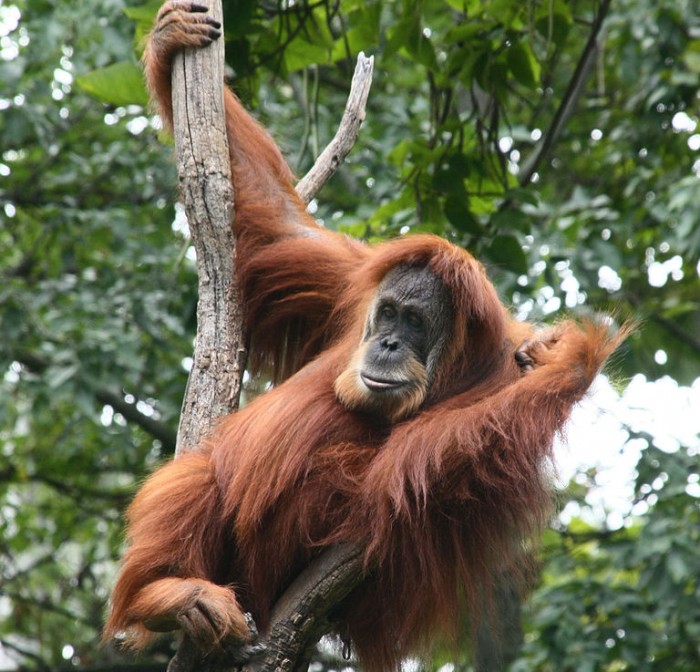 Orangutans have many unique attributes. They are the only great ape in Southeast Asia, and the only one outside of Africa, other than humans of course. They are also the only arboreal ape, spending their lives in the forest canopy. They share 96.4% of their DNA with us, making them one of our closest relatives.

There are two existing species of orangutans – one in Sumatra and one in Borneo. Sumatran orangutans have lighter hair, longer beards and narrower cheekpads than their Bornean counterparts. They live exclusively in the north of the island of Sumatra, but are critically endangered. In the last 25 years, Sumatra has lost almost half of its forests, and has one of the highest rates of deforestation in the world. The orangutan’s forest home is being felled and turned into oil palm plantations on a massive scale. Logging takes place even within national parks, and road networks divide forests into increasingly isolated fragments. Poaching is also a threat to these animals – mothers are killed so that their infants can be sold into the illegal wildlife trade.

Accurate estimations of population sizes are crucial for conservation efforts to save threatened species. Therefore, an international team of researchers from Europe and Indonesia has recently published results (in Science Advances) of an extensive series of surveys conducted in order to estimate the number of Sumatran orangutans remaining in the wild. They counted more than 3,000 nests on more than 200 line transects which covered over 300 km. They discovered that about 14,600 individuals exist, the good news being that this is 8,000 more animals than previously thought. However, this is not quite cause for celebration, as the higher estimate is only due to this more wide-ranging survey effort – the previous estimate of 6,600 Sumatran orangutans did not include animals living at higher elevations, in logged forests, or in areas west of Lake Toba.

The researchers then examined future deforestation scenarios using computer simulations, based on real land-use plans in the area. Their analyses showed that, should these plans go ahead, as many as 4,500 orangutans could disappear by 2030. So, even though the higher population size is good, the population of Sumatran orangutans is expected to increasingly decline if deforestation continues at its current, rapid pace.

Serge Wich of Liverpool John Moores University said: “It was very exciting to find out that there are more Sumatran orangutans than we thought, but this does not mean that we can be complacent. Numerous development projects are planned in the area that – if they are not stopped – could sharply reduce the number of orangutans over the coming years. We will need to continue to work together with the Indonesian government and other parties to ensure that this scenario will not happen. A difficult task, but we all hope that we can turn the tide for the Sumatran orangutan. We would like to see appropriate environmental impact assessments conducted for all developmental planning that concerns forests in the orangutan range so that disruption to their habitat may be avoided or reduced to a minimum.”

Orangutans are known as the ‘Gardeners of the Forest’ because they play a crucial role in forest regeneration, by dispersing fruits and seeds and creating gaps of light that reaches the forest floor when they move through the trees and build nests in the canopy. Their disappearance could mean the loss of thousands of species of animals and plants that share their forest ecosystem.