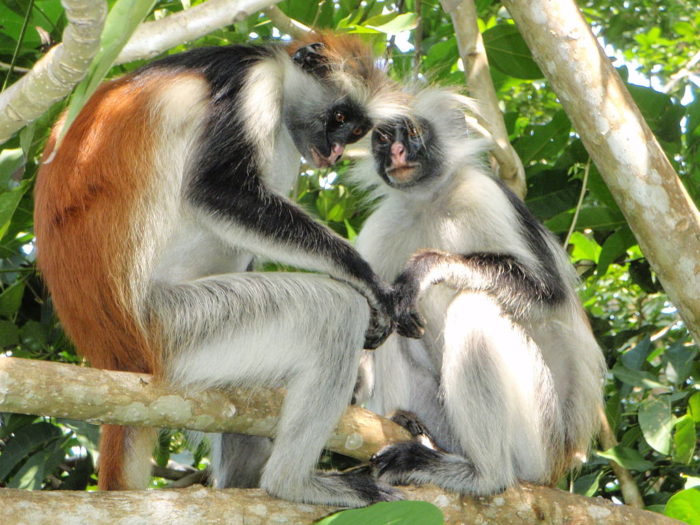 A team of scientists from the Wildlife Conservation Society recently completed the first-ever range-wide population census of the Zanzibar red colobus monkey. This species is found only on the Zanzibar archipelago off the coast of East Africa and is one of the world’s many endangered primates.

The census, published in Oryx, did bring some good news. The results showed that there are more than three times as many Zanzibar red colobus monkeys (more than 5,800 individual animals) than previously thought, and many more monkeys living within protected areas than outside of them. However, the bad news is plentiful. Survivorship of young animals is very low, the species is now extinct in four areas, forest habitats on which the primates and others species depend are rapidly being cleared for agriculture and tourism development projects and hunting is common.

“Scientists have known about the Zanzibar red colobus monkey for 150 years, yet this is the first systematic study of this poorly understood species across its entire range,” said Dr. Tim Davenport, Director of WCS’s Tanzania Country Program and the lead author of the study. “The systematic assessment redefines almost everything we know about this amazing animal, and is now guiding effective management strategies for this species.”

In order to gain a better understanding of the status and ecological needs of the Zanzibar red colobus monkey, the team spent two years (4,725 hours in the field) searching for and observing them. The surveys occurred both within and outside of protected areas on the main Zanzibar island of Unguja, and the scientists employed a new sweep census technique to collect data on group sizes and structures, demographics, and locations with the help of GPS devices.

Conversely, the assessment also highlighted challenges for conservation, especially for the more than 30 percent of the monkey’s population that live outside of protected areas. The scientists discovered that four of the forests previously known to contain Zanzibar red colobus monkeys no longer do. Four other locations were found to contain only one family group, which are unlikely to survive in isolation.

One of the largest threats to the Zanzibar red colobus monkey is deforestation. Forests on Unguja are being lost at a rate of more than 19 square kilometres per year due to agricultural activities, residential development and human population growth. The hunting of monkeys for food and retaliation for crop raiding is also concerning.

The result of the study were recently presented to the Zanzibar government. The authors recommend creating a new protected area to further safeguard the Zanzibar red colobus monkey as well as increasing primate and forest tourism operations. Another suggestion is to make the primate the official national animal of Zanzibar.

“The Zanzibar red colobus monkey is unique to Zanzibar and could be a wonderful example of how conservation efforts can succeed in protecting both wildlife and habitat, which in turn benefits communities,” added Davenport. “The species could serve as a fitting symbol for both Zanzibar and the government’s foresight in wildlife management.”

WCS will now work with the Government of Zanzibar to initiate a flagship species programme that will protect both primates and the archipelago’s remaining forests.