Though welcomed by farmers, the decision to implement such large scale lethal control on Islay has proven controversial and has been met with scorn by conservation bodies, recently prompting both the WWT and RSPB to take the issue to the European Commission in the hope of halting the plans.

By James Common on 4th November 2015 in Animal Conservation, Environment 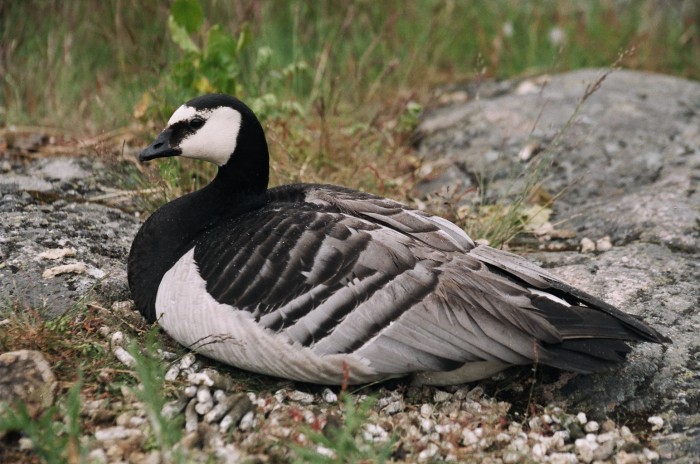 November will see a new “sustainable” goose management strategy rolled across the Hebridean island of Islay. Announced by Scottish Natural Heritage (SNH) in December 2014 the new scheme will reportedly reduce crop damage on the island inflicted by migratory geese. SNH aim to achieve this “by working with farmers to manage their land more effectively, through diversionary feeding of Greenland White-Fronted Geese (Anser albifrons) and by culling 25-30% of the 40,000 Barnacle Geese (Branta leucopsis) that winter in the area”. Though welcomed by farmers, the decision to implement such large scale lethal control on Islay has proven controversial and has been met with scorn by conservation bodies, recently prompting both the WWT and RSPB to take the issue to the European Commission in the hope of halting the plans.

“With an entire global population of only 80,000 individuals, Greenland Barnacle Geese are a relatively uncommon bird” write the WWT and indeed this is true, with 40,000 geese wintering on Islay, half the worlds population of these monochrome migrants, in winter, find themselves condensed into what is a rather small area. Barnacle Geese provide a real boost to ecotourism on Islay but despite this regularly find themselves at odds with the local population. Namely the agricultural community on the island who suffer sustained damage to grass crops each winter when the flocks arrive. Both the RSPB and WWT do acknowledge that there is a problem on Islay and to date have supported other forms of goose management. Mainly those that came about in the 1990’s as a result of the Local Goose Management Scheme which centered around subsidies, scaring and selective killing of Barnacle Geese to protect crops. It seems however that the latest proposal courtesy of the Scottish Government may be a step too far.

Key to the opposing argument is the fact that Greenland Barnacle Geese are strictly protected under EU legislation. “The barnacle goose is a migratory species listed under Annex 1 of Directive 2009/147/EC of the European Parliament and of the Council of 30 November 2009 on the conservation of wild birds (the codified version of Directive 79/409/EEC as amended)(the Birds Directive)” states the WWT in their complaint to the European commission. In the opinion of WWT & the RSPB, large scale lethal control of Barnacle Geese is in direct breach of the aforementioned legislation. Namely due to SNH’s reluctance to fully explore other solutions to the problem and the deliberate goal of reducing the population of a stringently protected bird species.

In direct contrast to the thoughts of WWT however, SNH defend the new scheme with Eileen Stuart, head of policy and advice writing that “Barnacle geese numbers have increased steadily on Islay over the past 20 years or so, and farmers have played a crucial role in this conservation success story. But with more geese, there has been increased pressure on both farmers and the public purse. We believe this new, long-term strategy strikes the right balance between conservation, making sure Islay farmers can use their lands profitably, and responsible use of public money. Local stakeholders have been vital in the development of this project.” In the opinion of the government the damage wrought by geese on Islay is more than enough to warrant such extreme control measures. Data relating to crop damage on Islay is however rather sparse and many who oppose the cull dispute the scheme claim that is based more on opinion than fact and intended to pre-empt damage, rather than to rectify it.

In their complaint to the EU, WWT and RSPB state that the cull appears to be based less on hard fact and more on the prediction of future damage. They state that the cull itself “clearly related to economic interest” and “that it is not a response to already proven damage but of the strong likelihood that this will take place in the absence of action”. Going on to write that:

“Any scheme of Adaptive Management, or process for licensing further killing, must therefore contain evidence that serious damage is occurring or is highly likely to occur, and that licenses are limited to those cases where such damage is occurring or is likely to occur. Furthermore, the damage or likely damage must be likely to be prevented by the actions carried under the derogation/license. This, therefore, means that a process must be in place to monitor damage/likely damage, and record its nature and if/how it has been prevented. No such evidence or monitoring is in place”.

Scouring various academic sources it is admittedly very hard to find evidence of wide-scale crop damage on Islay. As such, in keeping with the thoughts of the conservation bodies listed above it seems to me that the proposed goose management scheme is based more on rampant speculation than fact. Crop damage is a regrettable part of day to day life on Islay and likely has a profound impact on many farmers though evidence does exist to show this can be mitigated absent wide-scale culling. With reports into deterrents and management fairly common place including studies by the BTO and other scientific bodies (Douglas et al, 2009). Despite the clear flaws in the new scheme the intended cull looks set to go ahead and looks set to further polarize interested parties long into the future.