Birds and bumblebees that nest late in the year are suffering more from the destruction of habitat. As habitats disappear across the world, fewer nest sites results in greater competition, and species declines.

By Alex Taylor on 18th June 2017 in Bees, Bird Conservation 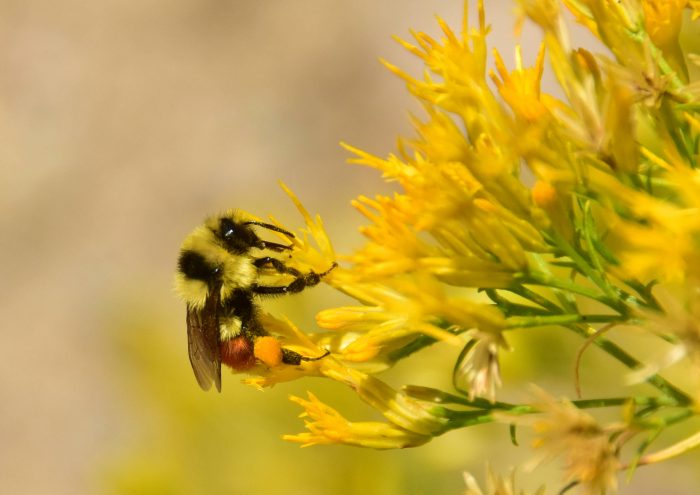 Birds and bumblebee species that nest late in the year are suffering more from habitat destruction, new research suggests. With habitats such as hedgerows and hay meadows in decline in many countries, fewer nest sites are available, leading to greater competition.

The University of Exeter study, published in Behavioural Ecology and Sociobiology, found that species which nest late – in April or May rather than February or March – are declining more than other species. Most affected are larger birds and bumblebees. The research goes some way to unravelling the mystery of why numbers of some closely related species are experiencing such different fates. An example would be the chaffinch which is thriving and the goldfinch which is struggling.

“The effects of habitat destruction are complicated, but we must understand them if we are going to save threatened species,” said Dr Andrew Higginson, of the University of Exeter. The loss of nest sites due to damage to the environment is an important cause of species extinctions. Ecologists understand why some groups of species are declining more, such as why farmland species are declining more than woodland species. But an enduring mystery is the big variation in the declines of closely related species. Fighting over nest sites may be part of reason – when nest sites are hard to come by, the species that will suffer most are that nest later in the year.”

The study combines mathematical modelling with an analysis of population changes in 221 bird and 43 bumblebee species worldwide. The results shows that if animals are still doing what they did before habitat damage caused by decades of agricultural intensification, then large, early-nesting species such as great tits will be fine, but late-nesting species such as tree sparrows will decline.

“Surprisingly, the model predicts that the large species will suffer much more from being late nesters,” said Dr Higginson. “This happens because large species know they can beat small species if they find a good nest site. So while smaller species settle for what they can find, the larger ones keep looking and end up failing to breed.”

The prediction was tested by collating data on the decline of birds and bees over the 20th Century, their body size and when and where they nest. In all data sets, predictions of the model were supported. This suggests that the model was correct about how animals behave when looking for nest sites. Also, that nest sites are important in determining difference between species losses.

“There are many resources other than nest sites which species share. Rapid reductions in the abundance of these resources will result in unprecedented conflicts that reduce the potential for species co-existence. The study suggests that conservation focus might need to be reconsidered. So far, conservationists have focused on providing enough food for animals such as birds and bees, such as the important bee-friendly flowers in gardens. To save rare species we need more focus on making sure that they have enough places to nest. To save bumblebees, people could let part of their garden grow wild between early spring and late summer,” Dr Higginson said.