Orange-fronted parakeets are small, brightly coloured forest-dwelling birds. They are classified as critically endangered by the IUCN, and as nationally critical in New Zealand which means, according to the Department of Conservation, that “the next stop is extinction.” 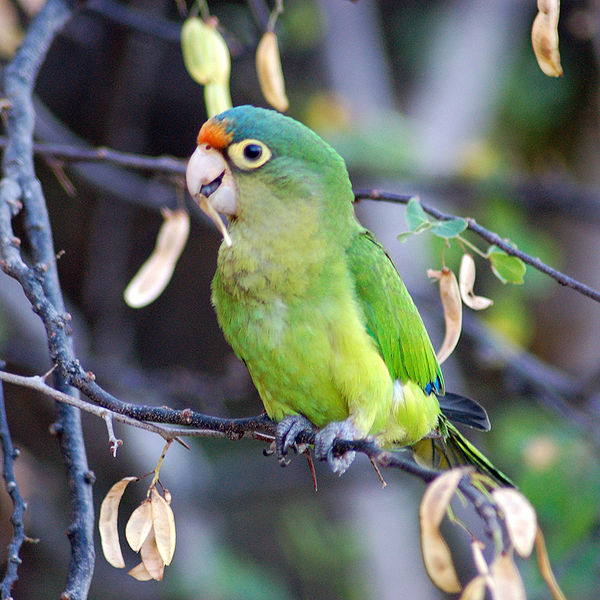 A new year brings new hope for a species of rare parakeet. Found only in New Zealand, Malherbe’s Parakeet, known locally as the kakariki karaka and more commonly as the Orange-fronted parakeet, faces threats from introduced predators and habitat destruction but, thanks to conservation efforts, now faces a brighter future.

Orange-fronted parakeets are small, brightly coloured forest-dwelling birds. They are classified as critically endangered by the IUCN, and as nationally critical in New Zealand which means, according to the Department of Conservation, that “the next stop is extinction.” These birds were once found throughout all the main islands of New Zealand, as well as some offshore islands, in the 1800s. Its distribution has declined so drastically over the last century however, that it is now the rarest parakeet in New Zealand, with a population of between 300-500 individuals. Non-native animals that have been introduced to New Zealand by humans have wreaked havoc – stoats and rats are excellent hunters both on the ground and in trees and prey upon females, chicks and eggs in their tree hole nests. Vast expanses of native forests have also been felled or burned, decreasing the area available for the birds.

In response, conservationists have released captive bred Orange-fronted parakeets onto islands that are free from predators. In 2005, they were released onto Chalky Island in Fiordland, and in 2007, 11 birds were moved to Maud Island. Further populations were moved to Tuhua Island in 2009, and to Blumine Island in 2011 and 2012. A recent study has documented the success of the Maud Island population, which has grown from the 11 initially released birds, to nearly 100 individuals. Regular surveys have been carried out to record the number of juveniles that have hatched on the island, and to monitor the progress of the released birds, which showed that the population growth spurt occurred within just two years after their release.

These results attested to the success of captive breeding and translocation conservation programmes. In their predator-free sanctuary the birds flourished, and have contributed to a growth in their global population. It is also hoped that this study will raise awareness of a species of which little is known due to its rarity. Perhaps in the future, the Orange-fronted parakeet will thrive, and its survival will not be quite so perilous. In the meantime, they are living proof that hands on conservation really does work.