As well as scales, pangolins are also hunted for their meat, considered to be “delicious” by some, a pound of which can sell for hundreds of US dollars. Unborn pangolin foetuses are also eaten as a delicacy, often found in soups. 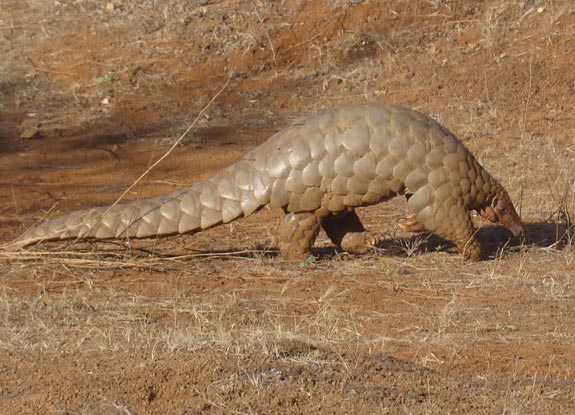 The illegal wildlife trade has many casualties. Rhinos, tigers and elephants all hit the headlines when deaths are reported. But there is one small mammal that is routinely ignored, even though it is actually the biggest mammal victim of the trade. Last Saturday was the second annual World Pangolin Day, drawing attention to the urgent need for action to save this weird but wonderful animal.

In total, there are eight species of pangolin worldwide, four in Africa and four in Asia. They are nocturnal and incredibly shy, so are not easily seen let alone studied by scientists. However, the poachers who hunt pangolins seem to have no trouble locating them and taking them from the wild. Pangolins are covered in brown scales to protect them from predators, but it is these scales that have made them vulnerable to Man. A single pangolin can have 1,000 scales on its body which are made of keratin, like rhino horn or our own fingernails. This means that they are valued in traditional Chinese medicine, even though they have no medicinal properties. As well as scales, pangolins are also hunted for their meat, considered to be “delicious” by some, a pound of which can sell for hundreds of US dollars. Unborn pangolin foetuses are also eaten as a delicacy, often found in soups.

Although trade in pangolins was banned by CITES in 2000, no mammal is found so frequently in markets, restaurants and shops in East Asia. TRAFFIC reports that 50,000 pangolins were poached from Vietnam alone in 2011, although this is just a fraction of the total amount. Making accurate estimates of the scale of the illegal trade is impossible. Pangolins are undoubtedly cute, but it seems that governments and conservation organisations have been overlooking them in favour of bigger, more charismatic species.

Increased awareness of the problem is desperately needed in order to pressurise governments and law enforcement to do more to stop the illegal trade and this is exactly what many conservation groups are now aiming for. Project Pangolin is one organisation that has been formed to raise awareness of the pangolin’s plight, using social media and creative content, and a new IUCN Pangolin Specialist Group comprised of scientists, vets and conservationists was established in February last year. The Zoological Society of London (ZSL) has also added 2 species of pangolin to their EDGE of Existence programme.

Pangolins do not do well in captivity as it is hard to replicate their specialist diet of ants and termites – as a result the animals suffer from stress. Less than 100 Asian pangolins make up the current captive population, and less than 10 pangolins have bred in captivity, so captive breeding for release back into the wild is not an option. This makes the situation even more urgent. The habitats in which they live must be saved, so conservationists are now pushing for protected pangolin “safe spots.”

On his recent television programme Attenborough’s Ark, Sir David Attenborough named a pangolin as one of his top ten species to save from extinction. More and more people are recognising the fact that these over-looked and over-harvested animals are in urgent need of protection from the devastating illegal wildlife trade.