R. ponticum poses a major problem for conservationists by creating dense thickets and out competing our native shrub and tree species by smothering the understory of our woodlands. It is not a new problem but one we are still persistently trying to deal with.

By Richard Hassall on 25th January 2012 in UK Conservation Perspectives 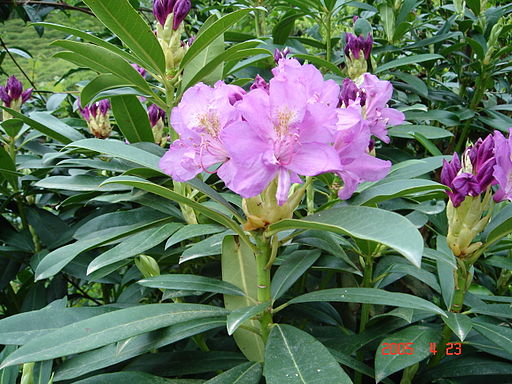 Rhododendron is a genus of plant encompassing over 1000 species. One species in particular, Rhododendron ponticum (R. ponicum),  was probably first introduced from southern Europe to Britain in the 18th/19th century, featuring in exotic plant collections and providing shelter for pheasants among other things. Their large colourful flowers are really a thing of beauty and one can definitely see the appeal of having one of these in your garden. However, R. ponticum poses a major problem for conservationists by creating dense thickets and out competing our native shrub and tree species by smothering the understory of our woodlands. It is not a new problem but one we are still persistently trying to deal with.

R. ponticum produces basal shoots, or suckers, as they are more commonly known. These readily emerge from the root system of R. ponticum, essentially forming a new plant. This poses a problem because even if R. ponticum is cut down, new plants may emerge from the remaining roots. It also allows the plant to spread readily without setting seed.  The seeds that R. ponticum do produce are tiny and dispersed by the wind. One large plant may produce millions a year but they have difficulty becoming established in areas with continuous ground cover. Once this vegetation is disturbed, for instance by clear felling, R. ponticum is no longer inhibited. It is able to grow in low nutrient and acidic soils giving this plant significant competitive advantage. The leaves and stems contain grayanotoxins which makes it unpalatable to grazers, allowing it to spread freely.

Combating R. ponticum is a tough challenge and requires great persistence. It can be controlled by cutting down plants and burning them, known as “rhoddie bashing”, usually followed by spraying herbicides.  This can be labour intensive and the herbicides may kill other surrounding species. Another option is the “lever and mulch” method which uses the plant against itself to limit light and prevent re-growth. Perhaps the most effective and precise method of control may be stem injections. This involves drilling a hole into the stem of a plant and introducing herbicide, thus killing the entire plant directly without affecting its neighbours. Any of these methods used with determination will hopefully generate a significant decline in invasive R. ponticum.