In total six species, including the northern grey-cheeked salamander, had got significantly smaller, while only one species had got fractionally larger.

By Alex Taylor on 7th April 2014 in World Conservation Issues 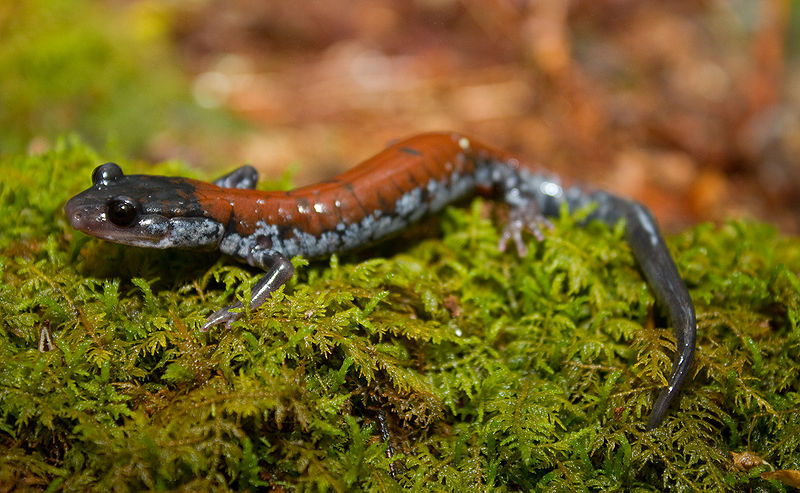 The Appalachian Mountains in the USA has a long evolutionary history. This, combined with the their blanket of cool, moist forests, has resulted in this area being a global hotspot for many species of salamanders. Along with many other amphibians, salamanders are in trouble at the moment, with some populations falling in numbers and many species going extinct. Now a study published in Global Change Biology last month has found that, in response to climate change, salamanders are shrinking.

The scientists behind the study, from the University of Maryland, examined museum specimens of salamanders caught in the Appalachians between 1957 and 2007, as well as wild salamanders found at 78 of the original collecting sites in 2011-2012. They discovered that from 1980 onwards, salamanders were, on average, 8% smaller than salamanders from earlier decades. In total six species, including the northern grey-cheeked salamander, had got significantly smaller, while only one species had got fractionally larger.

The changes to their body size were greater in the Southern Appalachians and at low elevations. These are areas where weather records show that the temperature has increased and rainfall has decreased – a strong confirmation that some animals will get smaller in response to climate change.

Karen Lips, the lead author of the study, states: “This is one of the largest and fastest rates of change ever recorded in any animal. We don’t know exactly how or why it’s happening, but our data show it is clearly correlated with climate change.”

To find out how climate change is affecting the animals themselves, one of the authors used a computer programme to create an artificial salamander, which enabled the team to estimate a typical salamander’s daily activity and the number of calories it burns. Using the weather records, they were able to simulate the minute-by-minute behaviour of individual salamanders based on weather conditions are their home sites throughout their lifetime. This showed that modern salamanders were just as active as salamanders have been in past decades. But, because the metabolisms of cold-blooded animals speed up as the temperature rises, present day salamanders have to burn 7 to 8% more energy to maintain that activity. This could be why their body size has reduced.

To get that extra energy, salamanders have to make trade-offs. They may spend more time foraging for food or resting in cool ponds and spend less time hunting for mates. Therefore, smaller salamanders may have fewer young and may be more easily hunted by predators. Future research must try to discover whether the species that are shrinking are those that are disappearing from many parts of their range.

The scientists, however, do believe that, although the decreasing size could be a genetic change, it could also be a sign that these animals are flexible enough to adapt to new conditions, giving hope that they will be able to keep up with the pace of our changing climate.