It looked more like a Halloween decoration than a creature of the woodland; except for the fact that it was scurrying across the ground.

By Guest Bloggers on 13th October 2011 in UK Conservation Projects 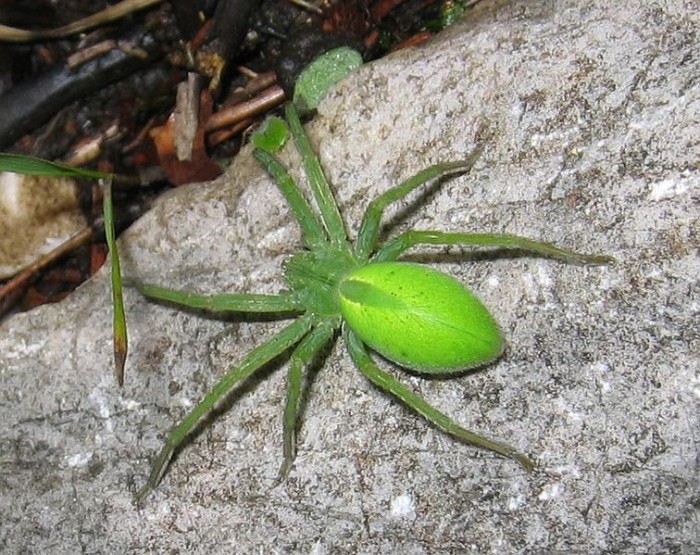 Image: By User:Tigerente (Own work) [GFDL (http://www.gnu.org/copyleft/fdl.html) or CC-BY-SA-3.0 (http://creativecommons.org/licenses/by-sa/3.0/)], via Wikimedia Commons

If you go down to the woods today…

Whilst enjoying a walk through some local woods during the recent heat wave, I made an exciting discovery. Quite by chance I spotted a bright green spider on the woodland floor. It looked more like a Halloween decoration than a creature of the woodland; except for the fact that it was scurrying across the ground. Luckily I had a camera on me and quickly took a shot before it disappeared into the leaf litter. Naturally I was curious and showed it to someone at my local wildlife trust, who was able to identify it as a female of the elusive species Micrommata virescens. Looking more like something that belongs in a Spiderman comic than the British countryside, M. virescens is in fact the only native member of the Huntsman, or Sparassidae, family to be found in Britain. The species is widespread but scattered in the South of Britain, where it is thought to be declining. There hadn’t been a sighting in the woods I visited since the eighties.

Despite its colour it is not considered an easy species to find. It likes to live in damp sheltered woodland, especially on the lower branches of saplings and tall grasses or sedges. These spiders don’t catch prey with webs, so will not be seen waiting out in the open. Instead they sit, head down, and pounce from above on passing insects. They do put their silk making abilities to some use though. In summer, during the breeding season, the females use silk to connect a wall of leaves which forms a relatively large area within which the egg sac can be kept safe. Keeping eggs safe is actually one of the earlier uses spiders made of silk, before it evolved to become the trademark hunting tool we all know of today. Finally, the females are much more likely to be spotted than males, with the latter having a much shorter season.

As with any species, monitoring is key to its survival, and my sighting has now been added to the county’s database. I am extremely glad I had a camera with me and was lucky enough to see a species few people have had the pleasure of spotting in the wild.