The Importance of Conserving Red Squirrels

By Richard Hassall on 12th September 2011 in UK Conservation Debates 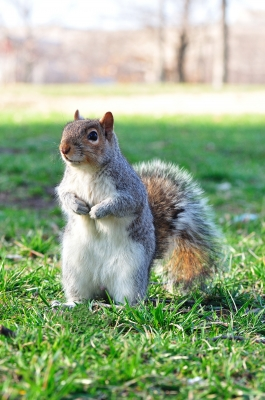 Since its introduction to the UK in the 1880’s the grey squirrel has steadily expanded north and like so many species introduced by man it has had a detrimental effect on our flora and fauna. The increase of grey squirrels has drastically decreased our native red squirrel numbers in England to the point where there are only a few small pockets of red squirrels remaining. Red squirrels are still relatively abundant in Scotland. However grey squirrels continue to expand their range and they now feature in the IUCN’s list of the 100 worst invasive species in the world. If they continue to spread there may come a time when red squirrel numbers fall below the point of recovery and the species may become extinct in the UK.

So why do grey squirrels have such a negative effect on red squirrels? In mixed woodlands and broadleaf forests grey squirrels have many behavioural advantages that allow them to out-compete red squirrels. This leaves fewer resources for reds, resulting in reduced fitness and lower breeding success. Grey squirrels are also known to carry the parapox virus which does not affect them but is known to be fatal in reds. This virus has only been found once in Scotland but has been responsible for many red squirrel deaths in England.

There is a big effort being made to conserve red squirrels, one method of which is culling. Culling of animals as a means of population control is particularly controversial, however it is a necessity if we are going to conserve red squirrels and right now it is the only effective means by which we can control grey squirrel numbers. It is also important to conserve large coniferous forests as red squirrels are not out-competed in this habitat, which is still abundant in Scotland. Lastly there is a significant amount of effort being put into monitoring our squirrel populations and by keeping a close eye on squirrel numbers we are able to establish whether or not our current conservation efforts are effective. Hopefully we will not see any further decline in red squirrel numbers in Scotland.