The past week found efforts to conserve the critically endangered Scottish Wildcat hampered somewhat by infighting between conservationists boasting different ideologies on how best to deal with feral cats – the single biggest threat to Scotland’s remaining Wildcats.

By James Common on 18th April 2016 in Animal Conservation, Environment 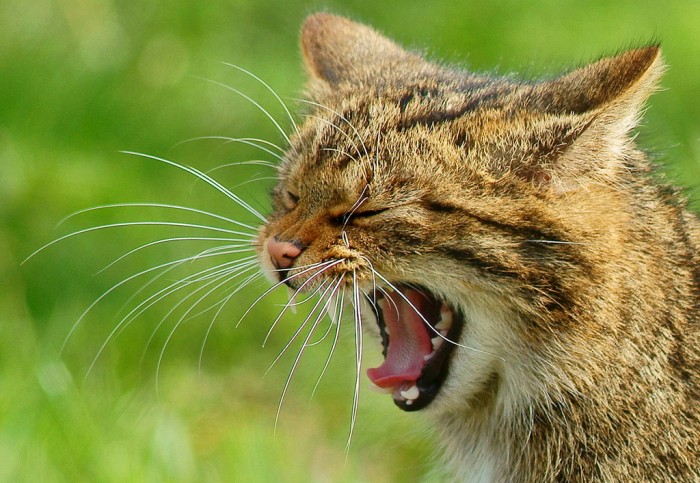 The woeful demise of the Scottish Wildcat (F. s. silvestris) is arguably one of the most pressing conservation concerns facing the UK at in current times. Indeed, now Britain’s most endangered mammal species, the wildcat now sits on the edge of an abyss – habitat loss, persecution and more importantly, interbreeding with introduced feral cats (Felis silvestris catus) pushing the iconic Highland denizen to the brink of extinction. It should come as consolation that recently the species has been subject to a high profile media campaign highlighting its plight and now is the focus of huge push to restore numbers. A push brought about by both Scottish Wildcat Action (SWA), the official body governing wildcat conservation, and Wildcat Haven – an independent group working towards the preservation of this much loved species.

With so many people working to reverse the decline of the wildcat it may seem that things are looking up for the feline though this week past conservation efforts found themselves hampered by infighting between the two groups. Infighting stemming from a fundamental disagreement on how best to deal with feral cats – the single biggest threat to Scotland’s remaining wildcats. The latest bout of distrust emerging after it was revealed that SWA have authorised the “humane dispatch” of feral cats trapped as part of the project – a move Wildcat Haven have branded as “barbaric and entirely unnecessary”.

It has long been known that Wildcat Haven stand virulently opposed to the killing of feral cats. The reasons for this centring on a number of factors but not least compassionate grounds and the risk that peoples pets could be mistakenly destroyed. WH state that lethal control measures pose a direct threat to wildcats that could be mistakenly killed in place of their feral counterparts and believe such measures may in fact not be beneficial to conservation measures on the whole – citing Australian research (found here) that concludes that killing feral cats simply encourages more to colonise the area in question. They believe that in order for lethal measures to succeed, the whole population of feral cats must be  eradicated – admittedly, an unlikely prospect given the 1000/1 ratio of feral cats to wildcats in Scotland. Instead the group, funded by various overseas sources, champion a trap/neuter/return (TNR) approach.

This opposition this week lead Wildcat Haven to call for the “suspension and a detailed review of the Scottish Wildcat Action Plan” – a move that Wildcat Action, backed numerous professional bodies (a list of which I will include below) to accuse WH of “misrepresenting the progress made in wildcat conservation“. Eileen Stuart, head of policy and advice at Scottish Natural Heritage (SNH) later called on wildcat haven to produce evidence of their activities in order to ensure the two parties can work together in the future.

Disputing the claims of wildcat haven whom claim feral cats are trapped simply to be “blasted in the face with a shotgun” WA state that, contrary to the claims put forth by the group, all trapped feral cats are humanely euthanised by their veterinary team – after being rigorously tested to determine their credentials. They state that such moves are in fact a lot safer than previous means of cat control such as nocturnal shooting which could lead to the inadvertent death of pure wildcats. Wildcat action have also made moves to return feral cats to their original location, though often landowners refuse to accept hybrid or domestic cats back on their land, leaving no option but to destroy them.

Surely I cannot be the only conservationist out there feeling a little, frustrated shall we say, at the current war of words raging between the two sides. Though undoubtedly full of good intent, wildcat haven by calling for a cessation to the current wildcat action plan appear to be directly opposing conservation measures aimed to protect the species  they claim to adore and why? Because of the deaths of a feral cats – a non-native species that has no place in the British ecosystem. There may well be truth in the notion that killing feral cats simply encourages more into the target area – the same thing happens with foxes, a wealth of available resources proving too good to turn down. What choice is there however when landowners refuse to take feral cats back onto their property. Why would they? These are, after all, an invasive species that is going to hunt and kill various native critters thus putting further strain on an already embattled ecosystem. Personally I am not opposed to destroying cats once all necessary steps to return them have been rebuffed. This is not born of a dislike for the feisty felines (I own cats) but out of realism and an understanding that Wildcat Action are doing what must be done.

I sincerely hope that the two sides can set their differences aside soon and work together towards a common cause – the preservation of one of our islands most iconic predators. Should this prove impossible then maybe Wildcat Action should evaluate their ties to the opposing group. Oh and in case you were doubting the credentials of Wildcat Action the full list of those supporting the scheme can be found below: