Rising temperatures, combined with past hunting on the Tibetan Plateau of central Asia, is forcing female wild yaks onto steeper and steeper terrain.

By Alex Taylor on 29th March 2015 in Climate Change 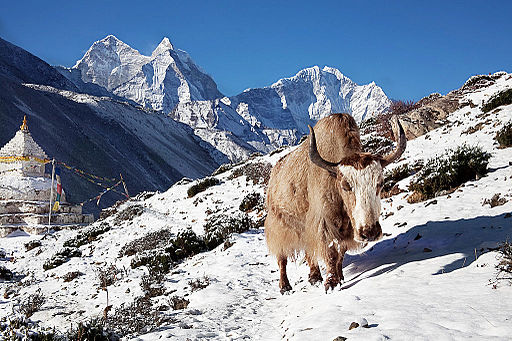 Animals that live at higher elevations will be hard hit by climate change. The wild yak is one such species. Numbering around 10,000 individuals they are vulnerable to extinction, facing threats such as habitat loss, poaching and competition with domestic yaks and their human herders.

A new study led by a team of researchers from the Wildlife Conservation Society, Panthera, the University of Montana and others, has found that climate change can be added to that list. Rising temperatures, combined with past hunting on the Tibetan Plateau of central Asia, is forcing female wild yaks onto steeper and steeper terrain.

The region is warming at an estimated rate of two-to-three-times faster than other parts of the world, and with that comes changes in precipitation patterns, including less snow which is their main source of water. Snow patches have become increasingly restricted, which is especially problematic for female yaks – they lactate through the winter and have to drink more water in order to produce their milk. This means that mothers must go to greater lengths to adapt, including climbing steeper and riskier mountains to find snow.

This was confirmed by the research team, who conducted ground-based fieldwork during the winters of 2006 and 2012 in the Keke Xili National Nature Reserve on the Tibetan Plateau. Female yaks were 20 times more likely to be found adjacent to snow patches than male yaks.

The team also analysed observations of wild yaks from 60 expeditions in the region from 1850 to 1925 by British, French, Swedish, German, Russian and American explorers. After these expeditions in the late 1930s, wild yaks began to be slaughtered by poachers. By comparing these historical records with recent data, they discovered that male and female yaks used similar habitat prior to this poaching, scattered across valleys, flat areas and mountain slopes. However, following the spike in hunting, female yaks were found in areas of steeper inclines, suggesting a greater sensitivity to hunting and a need to protect their offspring. It seems that male yaks have returned to their historic behaviour more quickly, but females still display the leftover behaviour from the time when poaching was so bad it was too dangerous for them to graze in more easily accessible areas. There is also evidence of this historic memory of hunting in elephants, as they remember hunting even decades later.

Lead author Joel Berger from the Wildlife Conservation Society and the University of Montana said: “What happens in the Keke Xili National Nature Reserve can provide valuable lessons as conservation planners prepare for similar climate change impact in other parts of the world. The twin findings – that the sexes of a cold-adapted species respond differently to modern climate change and long-past exploitation – indicate that effective conservation planning will require knowledge of the interplay between past and future if we will assure persistence of the region’s biodiversity.”