Last of the Leatherbacks? 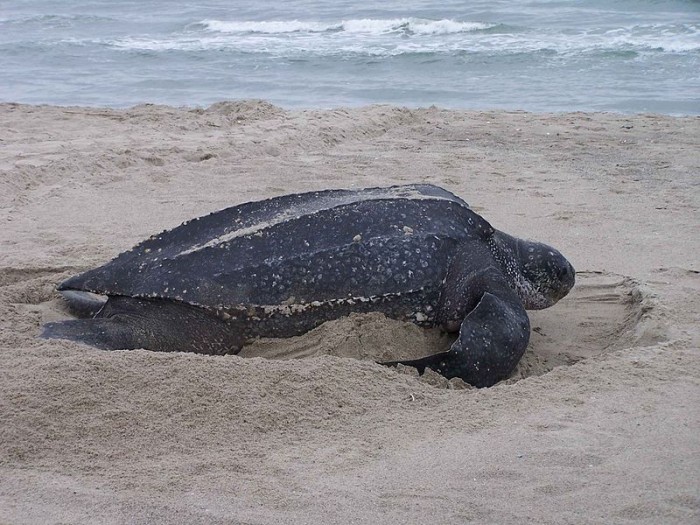 When learning about the leatherback turtle, the statistics make impressive reading – this is an animal that can grow up to 6 feet long, can weigh up to 2,000 pounds, can dive to depths of nearly 4,000 feet and migrates more than 7,000 miles. They also survived the extinction of the dinosaurs but when it comes to the many threats posed by man, it seems they will not last much longer.

A new study led by the University of Alabama, along with WWF, the National Oceanic and Atmospheric Administration and the National Marine Fisheries Service, has revealed that leatherback turtles could be extinct within 20 years at their last stronghold in the Pacific Ocean. The scientists used year-round surveys of nesting areas since 2005 in what is the most extensive research of the species to date. But the results did not bring good news. The international team of scientists discovered that there has been a 78% decline in the number of nests at Jamursba Medi Beach on Bird’s Head Peninsula in Papua Barat, Indonesia. These nests account for 75% of total leatherback turtle nesting in the western Pacific, so the decline is a real worry for this critically endangered species. The total number of nests has fallen from a high of 14,455 in 1984 to a low of just 1,532 in 2011. Less than 500 female leatherbacks now nest at the site annually.

The authors of the study, published last week in the Ecological Society of America’s online journal Ecosphere, say that if this dramatic decline was to continue “within 20 years it will be difficult if not impossible for the leatherback to avoid extinction.” They also identified four major problems that are facing the turtles.

Fortunately, the local communities on the Bird’s Head Peninsula have now become involved with turtle conservation, by patrolling the beaches and protecting the nests and the females when they come ashore. But this alone is not enough to prevent the potential extinction of leatherbacks in this region. These turtles migrate through the territory of at least 20 countries, so solving the problems they face in the ocean is an extremely complex task. Fishing regulations are notoriously difficult to enforce in the Pacific, but they are vital if we are not to see the last of the leatherbacks in their last great stronghold.