This debate poses a lot of questions and I certainly do not have the answers, though a scan of the available literature gives considerable food for thought. 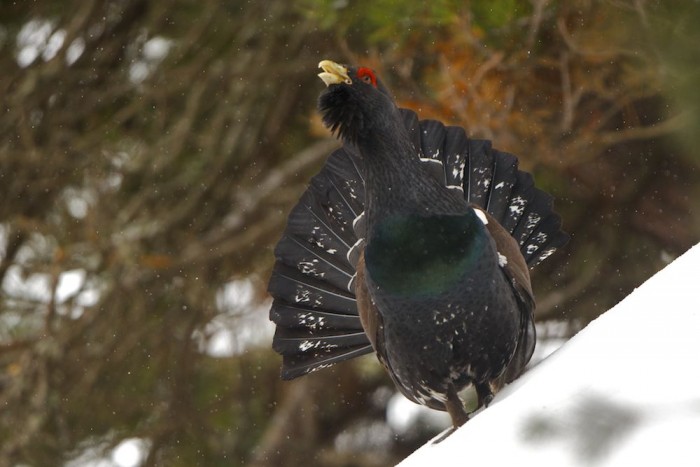 Lately I have noticed a number of comments, from a number of sources, claiming that Pine Martens could be having a negligible impact on Scotland’s vulnerable Capercaillie population. This, in my opinion, is an intriguing topic; both species stringently protected by law and both firm favourites among nature lovers. At present, the two species in question display starkly contrasting population trends; Pine Marten’s increasing and Capercaillie continuing to plummet. This has lead some, notably the Scottish Gamekeepers Association to suggest control of Pine Martens in order to protect dwindling Capercaillie populations. Could one iconic Scottish species be causing the decline of another? If so, would Pine Marten control be justified? This debate poses a lot of questions and I certainly do not have the answers, though a scan of the available literature gives considerable food for thought.

The Capercaillie (Tetrao urogallus) is the largest member of the Grouse family; a cold-adapted, ground nesting species native to Northern and North-Eastern Europe. It is dependent on conifer forests with an open canopy and a rich shrub layer abundant in Vaccinium species such as Bilberry, species which the Caper’ relies on for sustenance. The story of the Capercaillie in Britain is a particularly solemn one, today’s remaining birds derived entirely from Swedish stock imported in 1837 following the complete extirpation of native birds due to the combined effects of deforestation and overhunting. At first, the reintroduction program was a success, Capercaillie thriving until the mid-1970’s before beginning a sustained decline that continues until this day. By 2009, it is estimated that only 1268 male Capercaillie remained in Scotland marking a 36% decrease in numbers since previous surveys in 2004. Should this decline continue, it safe to assume that the “horse of the woods” could face extinction, for a second time, in the very near future.

Like the Capercaillie, the Pine Marten (Martes martes) has a rather woeful history in the UK and despite recent increases remains one of Britain’s rarest mammals. A member of the Mustelid family, it is estimated that the Marten was once one of Britain’s most common mammals, thriving as a result of widespread tree cover. Despite this, by the early 1900’s the species came close to extinction, namely as a result of the removal of said forests and direct persecution by man. By 1915 the species was mainly confined to the most inaccessible reaches of Scotland and Ireland with a few scattered remnant populations persisting elsewhere. Now however, the tide has turned. Due, in no small part, to legal protection, the Pine Marten has begun to make a comeback, spreading across the length and breadth of Scotland and slowly beginning to recolonise sites elsewhere in the UK. Indeed the present population estimate courtesy of The Mammal Society stands at around 3-4000 individuals.

The Pine Marten is a voracious predator, though one that has coexisted with the Capercaillie across its range for millennia. No one, on either side of the debate, denies that Martens are a natural predator of Capercaillie, opportunistically predating eggs and chicks when the opportunity arises. Indeed, as a ground nesting species, the Caper’ is particularly vulnerable to predation from a myriad of species. Among these, corvids and foxes which are already subject to control measures to protect the species and increase breeding success. As such, it stands to reason that an increase in any natural predator, in this case the Marten, will have some impact on the Capercaillie, though the extent of this remains open to interpretation.

The Scottish Gamekeepers Association (SGA), referencing a 2009 study where 57% of predated Capercaillie nests were taken by Pine Martens in Abernethy Forest, have advocated control measures as the only means to protect declining Caper’ populations. Indeed, both Scottish Natural Heritage (SNH) and members of the Biodiversity Action Plan group (BAP) have acknowledged that Martens may have an impact on fragile Capercaillie populations. SGA’s Allan Hodgson highlights the fact that despite combating the other factors associated with Capercallie declines, mainly habitat loss and deer fencing, declines continue and suggests predator control as the only means by which to halt declines. On this he writes: “What’s needed are new conservation measures, alongside the existingprogramme of work, and that must include measures to deal with all predators and pine marten in the remaining core Capercaillie area.”. Later highlighting the need for a managed scientific trial by writing: ”A managed scientific trial using live traps to capture and transfer pine marten during the breeding season in the remaining Capercaillie heartland has been mooted.Such a localized trial may establish the benefits or otherwise to Capercaillie survival in the core area, if pine marten were removed.

The notion that Pine Martens are directly impacting on Capercaillie populations has been hotly contested by some however with the Mammal Society in particular directly opposed to control measures. Although they acknowledge that in the later stages of decline, localised predation by Marten’s could have an impact on Capercaillie numbers, the Society claims that at present, the issue stands on the peripheral and would not accept such measures at present. Writing: “recognising that the pine marten is a scarce, protected mammal still recolonising its former range, The Mammal Society does not accept that the removal of pine martens is justified by the questionable benefits to capercaillie conservation”.

A number of other scientific studies have tried to get to the bottom of this controversial issue and many of them have produced contrasting results. In A recent study in fourteen forests found no link between Capercaillie breeding success and Pine Marten abundance though some have produced different results. In addition, attempting to summarise the existing data, Dr Fiona Matthews of the University of Exeter writes:

In my opinion, it is clear that something needs to be done now, in order to combat the worrying decline of the Capercaillie. Whether recovering Pine Martens are playing a role in this remains unclear and as such, under no circumstances, would I support a lethal control programme in current times. This said, surely it would not hurt to clear the issue up once and for all? I cannot help but agree with the SGA way of thinking in that a well-managed scientific study, involving the live capture and relocation of Martens from Capercaillie conservation zones would help put this matter to bed. The individuals relocated could be used to sustain reintroduction schemes elsewhere in the UK, thus benefitting the long-term conservation of Pine Martens. Such a study would allow us to highlight, once and for all, the relationship between these two species. If Capercaillie numbers recovered during the absence of Martens, perhaps a conversation regarding future control measures would be justified. If no recovery became apparent, Martens could simply be allowed to relcolonise the sites from surrounding areas. To me there is no downside to such a scheme though, as ever, the arguments surrounding the ethics of such schemes will no doubt come into play – though in my opinion, these play second fiddle to the wider conservation of the species in question. Surely it cannot hurt to trial such a study  and conclude this debate and for all.

Both species are iconic inhabitants of the Scottish landscape and both warrant strict protection. Indeed the Pine Marten has only recolonised 15% of its former range in Britain and still has a long way to go. Still, if we do not get the ball rolling and uncover the truth behind the issue, we may find ourselves standing by as the Capercallie slips even closer to extinction. At least with a trial of non-lethal control in such areas, the truth behind the debate will come to light and we may be able to make informed decisions regarding the future conservation of both species. As ever, this is simply my personal view, I am not in a position to advise people either way and fully understand some people will disagree with this. Still, it certainly makes for an interesting debate when two species of conservation concern potentially come into direct conflict.