P is for: Pipits

I don’t know what unusual super power ‘meadow’ would suggest, but collectively pipits do seem to possess the power of invisibility: the phrase ‘little brown job’ may well have been invented to describe pipits.

By Chris Foster on 20th August 2012 in A to Z of British Birds, Bird Conservation 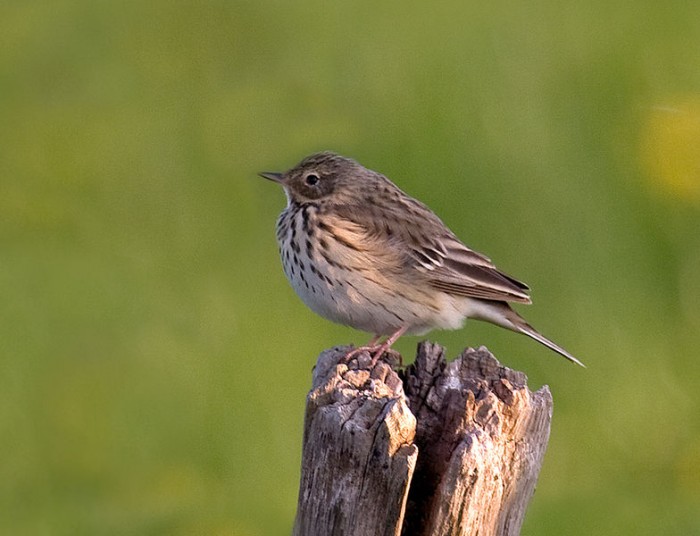 Rock! Tree! Meadow! Water! Pipits are named as if they were the bird world’s equivalent to the ‘Planeteers’. I don’t know what unusual super power ‘meadow’ would suggest, but collectively pipits do seem to possess the power of invisibility: the phrase ‘little brown job’ may well have been invented to describe pipits. Small, brown-buff-ish streaky little passerines, they bob about subtly, are well camouflaged, and rather tricky to tell apart.

I rather enjoy the way each has been named after the sorts of places you might find it, and the names do actually provide a useful first clue to a pipit’s potential identity.  A pipit on open grass or moorland is indeed likely to be a meadow pipit. Similarly, a darker coloured pipit along a rocky shore may well be a rock pipit. A pale fronted individual with an eye strip feeding on marshland or flooded fields could be a water pipit, a rare winter visitor. A biggish pipit with hints of yellow-green colouring, launching song flights from a tree top over a woodland ride or tree-studded heath edge? Probably a tree pipit.

Of course the rule doesn’t always apply so it’s worth listening carefully to their songs and calls – I promise they are different – and checking any other features you notice in a reputable field guide (leg colour can be useful, for example). Mind you, if you think these four are tricky, wait until a vagrant pipit turns up. Richard’s, Tawny, Olive-Backed, Red-throated….

P is also for: Ptarmigan

P doesn’t sound like it ought to stand for ptarmigan – that’s because the ‘p’ is silent. Is this unique among bird names? Ptarmigan comes from the Gaelic ‘Tarmachan’, and the only guess I can find at a source for the p is that it is an attempt to make it sound more Greek – or in other words, more ‘sciencey’. It’s a bit of a silly name, then.

Anyhow, this is the UK’s highest altitude game bird. Their global population circles the entire northern hemisphere, nesting in arctic tundra, and since the Scottish Highlands host the only tundra-like habitat in the UK, especially on the Cairngorms plateau, it’s there that our only ptarmigans are found. As you can imagine, climate change has the potential to push their preferred habitat gradually up and off the mountains, and there is already some evidence of a northward shift in British ptarmigan’s distribution. We may host just a fraction of the world’s ptarmigan’s – known globally as Rock Ptarmigan – but I think it would be a pity to lose the only British bird that turns white for the winter.

Finally, P is for: Puffin

It would seem churlish to cover the letter P without giving a prominent position to puffins. I covered them in a post last September, so I won’t try reader’s attention spans any longer by trying to add something. Though I will end with a pleasant picture and just say this: who but the hardest hearted folk could fail to love puffins?