In a westernised country as developed as the UK, you wouldn’t think stray animals were very common, but the fact is they are, and organisations like the RSPCA are constantly fighting for the welfare rights of domestic and wild animals.

By Emily Wilson on 8th March 2012 in Animal Conservation 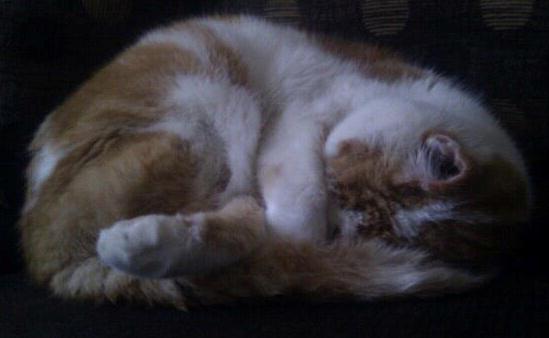 Since moving into my house in Manchester we have been graced with the constant visitation, sometimes 3 times a day, from a local tom cat, who we like to call Phil.  Now as cats come, he is not a pretty sight with his one ear and one fang.  When he comes he wants food and gets very excited for milk, but mainly he just likes to curl up on the sofa, or a warm lap to sleep…for hours.

We joke about having him over, and giving him any leftovers, but the fact of the matter is this cat could be abandoned and we might be the only ones looking out for him now.  In a westernised country as developed as the UK, you wouldn’t think stray animals were very common, but the fact is they are, and organisations like the RSPCA are constantly fighting for the welfare rights of domestic and wild animals.

When we move out he could have no one, and we can only hope that the residents after us will continue to help him here and there. People believe cats can be independent and happily look after themselves, especially when compared to dogs in terms of hunting and cleaning, but when we look at Phil we see he is tatty, old and always so hungry, which is such a change when cats are renowned for being such fussy eaters.

One the other hand, where I come from in Essex, is a semi-rural area, and we have at least three feral cats in the area.  The difference is they are in excellent condition and constantly seen with dinner hanging in their mouths.  This shows that turning from domesticated to feral is possible, but is it fair when they are not meant to be a feral animal?

When people think about abandonment of animals we all remember the adverts “A puppy is for life, not for Christmas”. Despite the publicity of this campaign each and every year, so many people still get a new kitten/puppy and later decide that they no longer want it.  If the animal is lucky, it will go to another family or an animal shelter.  However a common case, especially when surprise puppys/kittens are born, is that unwanted animals are thrown away, in the bin, as if they are just toys.  The RSPCA finding abandoned kittens in bins is sadly not a rare occurrence. I just can’t understand how someone can be so detached from compassion and guilt that allowing animal into your home and then disowning it as it it’s a piece of rubbish at a vulnerable age when it is completely defensive and unable to fend for itself.

The RSPCA is known to collect stray cats/dogs, however it is not always known clearly if they are in fact strays.  Phil is relatively tame and friendly indicating that he is/was owned.  We could keep him, but there is the chance that somebody does owns him, so the priority advice from the RSPCA was to try and find an owner, first by taking him to a vet to scan for a microchip, by placing “found” posters in the area and attaching a temporary paper collar on the cat and with our phone number on there, to try and find out where else he goes and if it is to any other houses.  If approximately 10 days go by and nothing is heard, it is presumed that the cat does not belong to anyone.  The RSPCA then advise you look for a new home, whether it be with yourself, a friend, a shelter or if they have room, the RSPCA themselves.  However there is the big issue that old cats such as Phil can be very attached the area, and the consideration goes that if he has made it so far following his regular route and hunting/scavenging in the area, does he really need to be “saved”?

As for Phil, I went down the collar route and received contact from a nearby family who told me his name is in fact Tango, he is very independent and rarely comes home, and is in fact 17 years old.   This was a happy ending for Phil…or Tango, but this is not always the case.

If you find a stray cat or dog in your area, go to the RSPCA website immediately.  Take precautions with the animal in case it is not tame, and then make the first priority searching for an owner, as there is a chance the animal may just be lost, or in Phil’s case extremely independent.  If no owner is found, contact your local RSPCA ‘lost and found’ shelter for further advice.